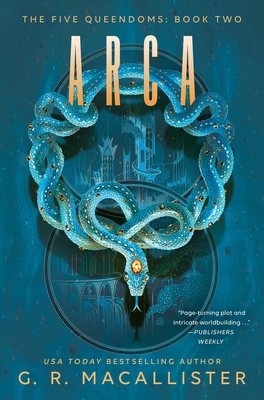 This is book number 2 in the Five Queendoms, The series.

Return to the Five Queendoms in the sequel to Scorpica, a sweeping epic fantasy that Rebecca Roanhorse called “ambitious and engaging,” in which a centuries-long peace is shattered in a matriarchal society when a decade passes without a single girl being born.

The Drought of Girls has ended, but the rift it broke open between the Queendoms is not so easily healed. Political tensions roil the senate of Paxim, where Queen Heliane vows to make her son Paulus the nation’s first ruling King or die trying. Scorpican troops amass on the border of Arca, ready to attack. And within Arca itself, its young, unready queen finds her court a nest of vipers and her dreams besieged by a mysterious figure with unknown intentions.

As iron and magic clash on the battlefield and powerful women scheme behind the scenes, danger and violence abound. Can anyone stop chaos from ripping the Queendoms apart?

G.R. Macallister, author of the Five Queendoms series, beginning with Scorpica, and also writes bestselling historical fiction under the name Greer Macallister. Her novels have been optioned for film and television. A regular contributor to Writer Unboxed and the Chicago Review of Books, she lives with her family in Washington, DC.