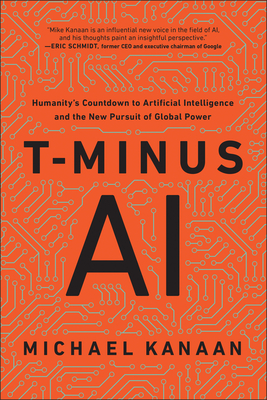 By Michael Kanaan
$27.95
Email or call for price

Late in 2017, the global significance of the conversation about artificial intelligence (AI) changed forever.

China put the world on alert when it released a plan to dominate all aspects of AI across the planet. Only weeks later, Vladimir Putin raised a Russian red flag in response by declaring AI the future for all humankind, and proclaiming that, "Whoever becomes the leader in this sphere will become the ruler of the world."

The race was on. Consistent with their unique national agendas, countries throughout the world began plotting their paths and hurrying their pace. Now, not long after, the race has become a sprint.

Despite everything at stake, to most of us AI remains shrouded by a cloud of mystery and misunderstanding. Hidden behind complicated and technical jargon and confused by fantastical depictions of science fiction, the modern realities of AI and its profound implications are hard to decipher, but crucial to recognize.

In T-Minus AI: Humanity's Countdown to Artificial Intelligence and the New Pursuit of Global Power, author Michael Kanaan explains AI from a human-oriented perspective we can all finally understand. A recognized national expert and the U.S. Air Force's first Chairperson for Artificial Intelligence, Kanaan weaves a compelling new view on our history of innovation and technology to masterfully explain what each of us should know about modern computing, AI, and machine learning.

Kanaan also dives into the global implications of AI by illuminating the cultural and national vulnerabilities already exposed and the pressing issues now squarely on the table. AI has already become China's all-purpose tool to impose its authoritarian influence around the world. Russia, playing catch up, is weaponizing AI through its military systems and now infamous, aggressive efforts to disrupt democracy by whatever disinformation means possible.

America and like-minded nations are awakening to these new realities—and the paths they're electing to follow echo loudly the political foundations and, in most cases, the moral imperatives upon which they were formed.

As we march toward a future far different than ever imagined, T-Minus AI is fascinating and crucially well-timed. It leaves the fiction behind, paints the alarming implications of AI for what they actually are, and calls for unified action to protect fundamental human rights and dignities for all.

Michael Kanaan is the co-chair of Artificial Intelligence for the US Air Force at the Pentagon. In that role, he guides the research, development, and implementation strategies for AI technology and machine learning activities across Air Force global operations. He is currently the Director of Operations for Air Force / MIT Artificial Intelligence. In recognition of his fast-rising career, the author was named to the 2019 Forbes "30 Under 30" list and has received numerous other awards and prestigious honors—including the Air Force's 2018 General Larry O. Spencer Award for Innovation as well as the US Government's Arthur S. Flemming Award (an honor shared by past recipients Neil Armstrong, Robert Gates, and Elizabeth Dole). Kanaan is a graduate of the US Air Force Academy and previously led a National Intelligence Campaign for Operation Inherent Resolve in Syria and Iraq.

"Mike Kanaan is an influential new voice in the field of AI, and his thoughts paint an insightful perspective. A thought-provoking read."

"Too many discussions of artificial intelligence are dominated by idealists and cynics. Mike Kanaan is neither: He's a realist with a wealth of insight on how smart machines are shaping the future. This is one of the best books I've read on AI."

—Adam Grant, New York Times bestselling author of Originals and Give and Take, and host of the chart-topping TED podcast WorkLife

"Kanaan's book makes us aware of the urgent need for international understanding and a formal agreement on AI. Without binding commitments, the future will pose threats, both military and social, that risk our very survival. AI may be a blessing, but it can also be the ultimate curse. The world must agree to draw a red line between the two, and make sure that no one crosses it."

"Never have I read a book that did a better job of putting the challenges and prospects of artificial intelligence into context. It's an exceptionally rich context, involving science, history, technology, and our current geopolitical situation. Reading this book will not only help you understand what AI is all about, it will help you understand how it fits into the world today and into the future."

"Kanaan recounts the history of AI and why its rapid advance prompts both hopes and fears. He offers a valuable and distinctive perspective on the international tensions it may create."

"Mike Kanaan is a driving new voice in the field of AI. His explanations, insights, and perspectives are trustworthy and brutally intelligent. He's the voice of reason in the room, the one to look to."

—Jeremy Bash, NBC News analyst and former chief of staff for the CIA and Department of Defense

"As a tech venture capitalist, I know how critical it is that people understand artificial intelligence. T-Minus AI explains what we all need to know—not only what AI is, but also the great implications going forward. Eye opening and extremely entertaining."

"T-Minus AI is enormously illuminating—a fascinating deep dive into one of the most important issues of our day by a leading expert in the field—who also happens to be a riveting writer. I haven't learned so much from a book in ages."

"If we are going to prepare our students to lead the next generation, every educator needs to understand the impact of AI on our society. Kanaan's work is the perfect resource to bring you up to speed and to understand the history, scope, and future of AI technology. Leaders and teachers at all levels of education, along with their students, need this book on their reading lists."

—Jeff Charbonneau, former US National Teacher of the Year and former finalist for the Global Teacher Prize

"What is AI? If you're mystified by the hype, high hopes, and conflicting predictions of the power and danger of Artificial Intelligence, this book is for you. It offers a gentle introduction into the history of intelligent machines, the strengths and the dangers that they pose, the different ways that selected world powers make use of (and misuse) these technologies, and what kinds of policies and laws might help. Mike Kanaan offers a fresh new voice."

"T-Minus AI is a must-read about the technology that will drive massive social and political change in the future. If you want to understand AI and its impending impact on the world, this is the book to read!"

"Part explainer. Part call-to-arms. Kanaan's book makes AI understandable and with that it also makes something clear: AI is both a threat and opportunity. A perfect hybrid of educational and thrilling, T-Minus AI is an essential read."

"For an accessible and sober explanation of today's most transformative technology, this is THE book to read. T-Minus AI will be part of a new canon."

"T-Minus AI is a thought leading gem that explains the underlying technology and geopolitical power of AI. Brilliantly written, immensely informative, and as entertaining as a great novel!"

"It takes rare talent and a sharp mind to make complex technical topics like artificial intelligence and machine learning sound both accessible and beautiful. Kanaan has done both. This is an exceptionally well-written, thoroughly researched book. Read it. It will make you smarter!"

"Artificial intelligence is the next wave that everyone and every business must understand. Mike's leadership in the field is powerful, and his explanation of the topic is second-to-none. Read this book!"

"At a critical time for humanity, this captivating book is a must-read for anyone wanting to understand how AI works, how it can be used, and how it will affect us all."