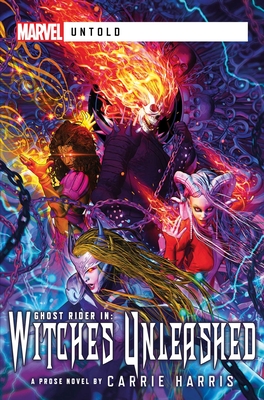 Three extraordinary supernatural heroes join forces with Ghost Rider to capture Lucifer himself and return him to Hell, in this staggering Super Hero adventure from Marvel: Untold

Johnny Blaze, aka the Ghost Rider, has accidentally released Lucifer from Hell, and that’s a serious problem. While hunting the 666 fragments of Lucifer’s soul now loose on Earth, Johnny enlists the aid of witches Jennifer Kale, Satana Hellstrom and Topaz to track down a sliver of the demon which is possessing the body of Jennifer’s cousin, Magda. Lucifer is looking for the Tome of Zhered-Na, aiming to release the demon within its pages and unleash hell upon the world. But the witches are the Tome’s protectors, and they aren’t going down without a fight. Now the witches must work together, trust the Ghost Rider, and put their personal demons aside to stop the King of Hell in his tracks.

CARRIE HARRIS is a geek of all trades and proud of it. She’s an experienced author of tie-in fiction, former tabletop game executive and published game designer who lives in Utah.

"Harris weaves a fast-paced narrative that allows each character to shine. I would recommend this novel to Marvel fans who enjoy a deep dive into the supernatural side of that universe, or to action story fans in general."
— Martin's View

"I loved the relationships and dynamics between the characters. The banter, the bickering, the support… it was all spot on. I also love how Carrie have made the ladies move on from what they are in the comics. They joke about the clothes they used to wear, they acknoledge toxic relationships and grow in self confidence and power."
— Simply a Book Drunkard

"Carrie Harris shows that she's not just great at writing interesting interpersonal moments, but can craft exciting and engaging action sequences as Ghost Rider and the witches take on some powerful foes across the book."
— Trans-Scribe

"Carrie Harris does not disappoint with this fast paced novel. It is a perfect mixture of serious, amusing and action. The characterisation was perfect and the trio’s personalities mixed so well, each bringing their own personality and demons to the table, creating a rather unstoppable force."
— What You Tolkien About