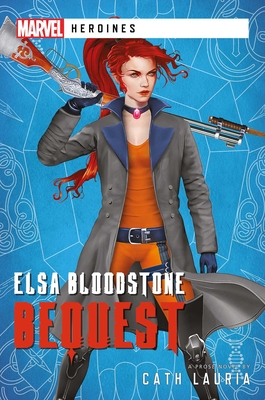 Elsa Bloodstone just can’t catch a break. She’s barely finished shutting down a hive of ratmen when a special ops squad turns up guns blazing – and they’re shooting at her! It’s nothing a good grenade can’t sort out though. When Elsa returns home, she discovers an unexpected guest claiming to be her long-lost sister, seeking her own stolen Bloodstone shard. The Bloodstone is the secret to Elsa’s superhuman powers, and a shard in villainous hands is seriously bad news. Cue globetrotting adventures full of monster-smashing. But danger stays one step ahead of them as Elsa realizes her sister isn’t quite what she seems, and an old enemy with a secret about her family’s past could overturn everything Elsa’s ever believed.

Cath Lauria is a Colorado girl who loves snow and sunshine. She is a prolific author of science fiction, fantasy, suspense and romance fiction, and has a vast collection of beautiful edged weapons.

"Elsa Bloodstone: Bequest is a madcap thrill-ride full of monster battles, jet-setting and bickering siblings... If you’re on the lookout for a pulpy action adventure with a Marvel character who deserves much more attention (and lots more stories after this), I can heartily recommend you give this a go."
— Track of Words

"I thought that Bequest was a solid story: the strongest element is definitely the way it explores Elsa’s relationships: with figures like Misty, who are clearly among a select few who might cautiously be called friends and, increasingly, with the woman she now finds herself calling sister. Again, I don’t want to spoil too much about the ongoing rollercoaster of suspicion, growing bonds and the spectre of betrayal, but I found it very satisfyingly depicted."
— The Storyboard

"Elsa is hilarious. Snarky and sarcastic, she always has a witty comeback or quip ready, even when she’s in battle. Lauria gives Elsa a very distinct and memorable voice… Elsa Bloodstone: Bequest is a monstrously good time to read."
— But Why Tho

"Elsa has a distinct voice, it’s British and snarky and I’d love to see where future adventures take her!"
— This Bliss Life