The Head of Mimir: A Marvel Legends of Asgard Novel (Paperback) 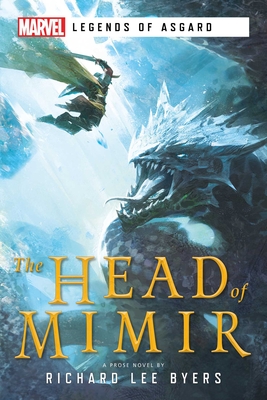 It is a dark time for Asgard. The All-Father is trapped in a bewitched Odinsleep, inspiring an all-out assault from the Frost Giants. They evade the gods’ defenses with uncommon ease, as if guided by augury. Heimdall, a quick-witted young warrior still finding his place amongst Asgard’s defenders, believes it no coincidence that Odin lies enchanted and that the Giants are so well-informed. Sneaking into Odin’s inner chambers, he discovers that the severed head of Mimir, a great source of wisdom, is missing. Accompanied by his sister, Lady Sif, Heimdall must quest across the Nine Realms to retrieve it, lest mighty Asgard fall.

RICHARD LEE BYERS is the author of over fifty fantasy and horror novels, including a dozen set in the Forgotten Realms universe. A resident of the Tampa Bay area, the setting for many of his horror stories, he spends much of his free time fencing and playing poker (presumably not at the same time).

“Epic fantasy at its best. Swords and sorcery, swash-buckling action and illusion, twisting and turning politics of men and gods.”
— SF Crowsnest

"Mimir is packed with action and ideas, many of which come from Norse mythology itself… a book that is not quite fantasy or science fiction, but a mash up of the two genres... and then adds more action that I have ever read in such a book. For readers who enjoy their fantasy full on and nonstop, this will be a great read."
— SF Book

"The Head of Mimir is a fun, fast-paced fantasy adventure… this offers a fresh perspective and its own unique take on Heimdall, Sif and the Nine Worlds, while finding a satisfying balance between fantasy and mythology."
— Track of Words

"An absolute 'must' for the legions of Marvel Universe fans... With many an unexpected plot twist and turn, The Head of Mimir is a wonderfully entertaining, impressively entertaining, and highly recommended."
— Midwest Book Review