Things that Fall from the Sky (Paperback) 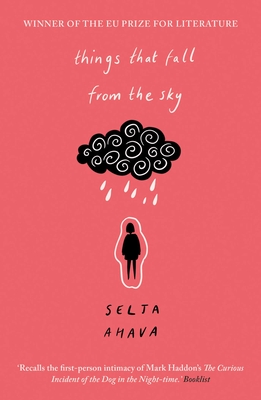 One quirk of fate can send life spiralling in the most unexpected direction...

A young girl loses her mother when a block of ice falls from the sky. A woman wins the jackpot twice. A man is struck by lightning four times. Coincidence? Or something more?

Things That Fall from the Sky is the tale of three lives that are changed forever by random events. But it is also a meditation on the endurance of love, the passage of time and the pain of loss. Selja Ahava, one of Finland's best-loved novelists, weaves these stories together in an unforgettable, one-of-a-kind fable about the twists and turns that can define a lifetime.

Selja Ahava is a novelist and a scriptwriter. Her acclaimed debut novel The Day the Whale Swam through London (2010) was nominated for the Helsingin Sanomat Literary Prize, and won the Laura Hirvisaari Prize (the Bookseller’s Literary Prize) in 2010. Her second novel, Things that Fall from the Sky (2015) won the EU Prize for Literature in 2016, and was nominated for the Finlandia Prize and the Tulenkantajat Prize.

Emily Jeremiah and Fleur Jeremiah are the translators of Aki Ollikainen's White Hunger (Pereine Press, 2015), which was longlisted for the 2016 Man Booker International Prize. Their other co-translations include Asko Sahlberg’s The Brothers (Peirene Press, 2012).

‘Leaves other tales told from a child's-eye view in the dust... An intricate and tender novel.’
— Literary Review

‘A whimsical and thoughtful rumination on the terrifying randomness that dictates the course of a life... Ahava’s rendering of Saara recalls the first-person intimacy of Mark Haddon’s The Curious Incident of the Dog in the Night-Time (2003) and serves as an example of what strong writers can do with simple sentences.’
— Booklist Starred review

‘A literary fairy tale... People who live in cold climates need stories that can be spun and unspun around warm hearths.’
— Literary Hub

‘Ahava embraces the eccentricities of her characters and the role of randomness in the novel's plot, pivoting from a meditation on grief into something closer in tone to the Ricky Jay-narrated prologue of Paul Thomas Anderson's Magnolia.’
— Words Without Borders

‘It’s not hard to see why Things that Fall from the Sky won the EU Prize for Literature. Ahava has created a poignant tale about disrupted lives, ruptured identities, grief on hold, the desire to be understood and the human need for closure.’
— European Literature Network

‘A poignant tale about what shapes our identity and choices.’
— The Tablet

‘A tender, bittersweet work on the micro-tragedies in life, the roll of chance in all our fates, and the sorrows that mark our journeys through life.’
— Victoria's Book Reviews

‘A wonderful gem of a book... It's tragic and it's humorous, it's frightening and it's inspiring. This is a high quality novel by an accomplished author.’
— Marjorie’s World of Books

'Selja Ahava's third novel, based on her own experiences, is an overwhelmingly honest, precise and wise story of letting go, of memories, sorrow and of life's unexpected twists.'
— Me Naiset magazine, Finland

'Before My Husband Disappears is a victory of literary art, exactly the kind of victory that one would like to see more of: masterly, beautiful and heartbreakingly touching.'
— Turun Sanomat, Finland

‘Things that Fall from the Sky underscores the arbitrariness, absurdity, excess, and fatefulness of life. It is so unsettling that it makes you laugh... Ahava succeeds in depicting the human mind, for which any unexpected change can...force one to reflect on existential questions.’
— Helsingin Sanomat

'Before My Husband Disappears is a beautiful, important and timely novel.'
— Helsingin Sanomat, Finland