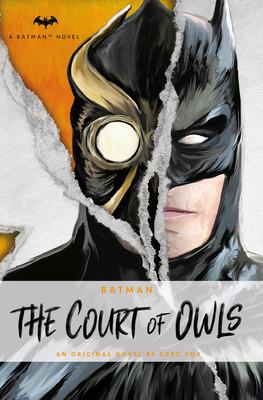 An original novel pitting Batman against the Court of Owls, a secret society of wealthy families that's controlled Gotham for centuries using murder and money.

For generations, an apocryphal cabal has controlled Gotham from the shadows, wielding fear and violence through its undead assassins, the Talons. THE COURT OF OWLS.

Dating back centuries, its leaders are men and women of wealth and influence who meet in secrecy, hiding their identities behind stark white masks. Employing science and alchemy, they sought to kill Bruce Wayne who, as Batman, dealt them their greatest defeats. Even then they faded back into the darkness, and he could not eliminate them entirely.

Now, Gotham City is plagued with a series of brutal murders in which mutilated bodies are burned almost beyond recognition. Batman and his allies--including Nightwing and Batgirl--quickly realize that the Talons have returned, yet the reason for the killings remains tauntingly unknown.

As the heroes seek answers, their path stretches back more than a century. Should the Owls obtain what they seek, it could grant them power that no one could counter. With each moment that passes, more victims appear.

Batman must stop the Talons before they kill again.

Greg Cox is a New York Times bestselling author known for novels tying into some of the most successful franchises in media today, including Star Trek, Planet of the Apes, Terminator, and Godzilla. He's contributed some of the most popular prose novels involving the DC Universe, from the sweeping mega-series 52, Countdown, and Final Crisis to the blockbuster movie tie-ins Batman: The Dark Knight Rises and Man of Steel.

“Anyone not indulging their inner Dark Knight by investigating Titan Books and DC Comics' current line of Batman prose novels is missing out on some of the best genre writing available.” - SyFy

“a finely constructed mystery for Batman comics readers up for a new twist on Batman, for fans of NBC’s Gotham series, and fans of the New 52 in particular” - Borg.com

“an example of the best of classic Batman, weaving the elements that are most treasured by fans into its fast-paced and intricate plot” - The BiblioSanctum

“Overall, I really enjoyed Batman: The Court of Owls. The story was interesting and engaging, the characters were fully realized, and it left me wanting more in the end” - Geekisphere

“With his contribution to the DC Comics Novels line-up, Greg Cox has delivered something focused, interesting and entertaining, which will be an enjoyable read for any Batman fan” - Eggplante

"An enjoyable novel from start to finish... I literally could not put this book down, especially with all its intricate twists and surprises that I encountered along the way." - Impulse Gamer