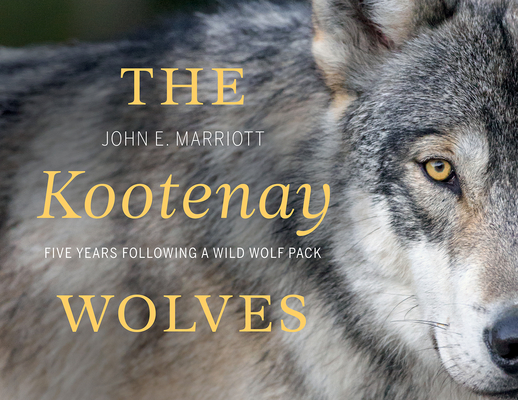 A spectacularly illustrated photography book full of behavioural observations and wolf tales that will engage those interested in the state of wild wolves in North America.

On August 24, 2013, professional wildlife photographer John E. Marriott received a phone call that would dramatically alter the course of his career for the next half decade. A friend of his had witnessed gray wolves eating a moose carcass on the side of a highway at dawn that day in Canada's Kootenay National Park. By the time Marriott arrived hours later, the moose was gone, hauled away by Parks Canada staff, but a lone wolf remained. Marriott's first magical encounter with that member of one of the Rocky Mountain national parks' most secretive wolf families spawned an incredible five-year project by the photographer to learn more about these wolves.

The Kootenay Wolves chronicles Marriott's tenacious efforts hiking, snowshoeing, and hiding silently in camouflage for hundreds of days to document these wary wolves and their tenuous hold in a home range rife with danger, including tourist traffic, transport trucks, trophy hunters, and trappers. Marriott not only watched this family thrive against all odds but also saw and photographed some truly astonishing behaviours rarely documented in the wild before.

Join John Marriott for a visually exhilarating journey into the daily lives of the Kootenay wolves as he introduces you to Hawkeye, Whitey, Stranger, and the truly extraordinary wolf he simply called Mom.