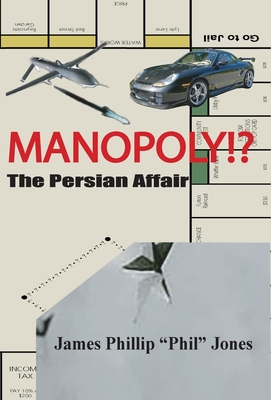 By James Phillip Phil Jones
$29.99
Available to order - Usually arrives at our store in 1-5 days

Jackson Reynolds and Beau Benoit are two men with unknown pasts. Jackson hires Brooke Benoit as his university assistant, Brooke is Beau's sister. Beau is a Harvard MBA that begins in the private sector on Wall Street. He quickly moves up into the Federal Reserve. Jackson and Brooke work to develop Jackson's dream, to alter the game of Monopoly into a real time predictor of any micro or macro economy. Beau's position at the Fed creates the opening to move the MANOPOLY Project into the mainstream federal government.

Bad actors within the university are nefariously connected with the Iranian government. They plant a bug in the project. Once discovered, an international trail of espionage ensues. As the story unfolds, it is discovered that the events in the Middle East have become very intertwined with the project. This event pits the NSA and the CIA against the IRGC and the Quds Force fighting to control the information. The top actors in this drama are President Trump and The Supreme Leader of Iran who are directly involved. The actions escalate until international assassination is sanctioned. The assassination is answered by a retaliatory strike considered by the civilized world to be a war crime.

Jackson and Beau both find love and happiness in a story of human achievement and redemption. Follow them on their journeys of personal discovery and growth. All while creating a world of very believable business espionage, political suspense, and technological innovation that will run long through future novels. This story is pulled right from today's headlines and will keep you on the edge of your seat.