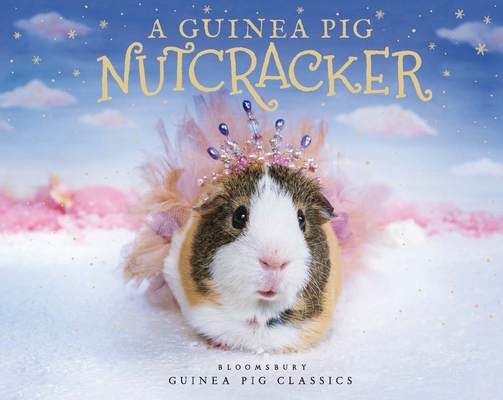 The universally beloved ballet about Clara and her nutcracker gets the Guinea Pig Classics treatment!

As the curtain rises, Clara is opening her presents under the Christmas tree. She falls in love with a present from her godfather Drosselmeyer: a wooden Nutcracker. When Clara falls asleep that night, she is swept up in a battle between the Nutcracker (who has become a handsome prince) and the terrible Mouse King. This leads to a magical trip into the realms of fantasy, a sweet-filled wonderland where the beautiful Sugarplum Fairy dances...

This is the world-famous ballet, as you've never seen it before.

Alex Goodwin has an MA in Creative Writing from the University of East Anglia. He is Associate Editor at the International Institute of Strategic Studies and lives in London.

“Like a comfortable armchair upon which you might read one of these tiny masterpieces, the success of the series--and let there be no doubt that it is a triumph--rests on four points: the iconic but charming literature upon which each book is based; the unwavering cuteness of the guinea pigs; the delightful styling of each photograph with costumes by Newall; the sparse brevity of Goodwin's adaptations that preserve the essence, the aesthetic, and the language of the original.” —Los Angeles Review of Books on A GUINEA PIG ROMEO & JULIET

“A sweet take on Shakespeare's tragic love story . . . Fully illustrated with guinea pigs in costumes worthy of The Globe Theatre in London, this book is definitely not one to miss.” —BookTrib on A GUINEA PIG ROMEO & JULIET

“We thought Pride & Prejudice couldn't get much better--then we saw lines from Jane Austen's classic novel paired with some seriously dapper rodents.” —EW.com on A GUINEA PIG PRIDE & PREJUDICE

“This may be the definitive version of Pride and Prejudice. If they could get War and Peace down to this length, it would be a service to mankind.” —Salman Rushdie, on A GUINEA PIG PRIDE & PREJUDICE

“An entirely new, adorably hilarious take on the classic story . . . This affectionate, quietly dramatic homage is the perfect gift for Austen-philes, Austen-newbies, guinea-pig aficionados and anyone who appreciates a tale well told” —BookPage, on A GUINEA PIG PRIDE & PREJUDICE