A Fire in My Head: Poems for the Dawn (Hardcover) 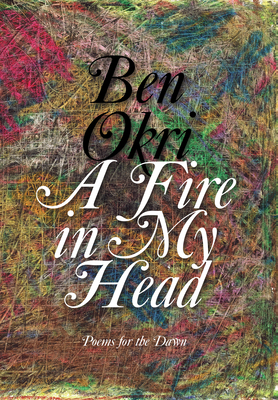 From the renowned Booker Prize–winning author, a powerful collection of poems covering topics of the day, such as the refugee crisis, Black Lives Matter protests, and COVID-19.

In our times of crisis
The mind has its powers

This book brings together many of Ben Okri’s most acclaimed and politically charged poems.
“Grenfell Tower, June 2017” was published in the Financial Times less than ten days after the fire, and Okri’s reading of it was played more than six million times on Facebook.
“Notre-Dame Is Telling Us Something” was first read on BBC Radio 4, in the aftermath of the cathedral’s near destruction. It speaks eloquently of the despair that was felt around the world.
In “shaved head poem,” Okri writes of the confusion and anxiety felt as the world grappled with a health crisis unprecedented in our times.
“Breathing the Light” is his response to the events of summer 2020, when a Black man died beneath the knee of a white policeman, a tragedy sparking a movement for change.
These poems and others, including poems for Ken Saro-Wiwa, Barack Obama, Amnesty International, and more, make this a uniquely powerful collection that blends anger and tenderness with Okri’s inimitable vision.

Ben Okri is a poet, novelist, essayist, short-story writer, anthologist, aphorist, and playwright. He has also written film scripts. His works have won numerous national  and international prizes, including the Booker Prize for Fiction. His illustrated eco-fable Every Leaf a Hallelujah and his novel Astonishing the Gods were published by Other Press in 2022.

“The fire in Ben Okri’s head, and thus his poems, is one of both indignation and illumination, casting light on the injustices of contemporary life, particularly Black life the world over, yet never abandoning the importance of beauty, art, nature, and the human connections we forge. Whether written for an occasion, in tribute, or addressed to inspirations or intimates, these poems strike notes of international importance and personal significance. Okri witnesses and reminds us of the important lesson that ‘Tyranny rises where vigilance sleeps,’ all the while holding space for each of us to ‘Walk in a Moonlight Wonder’ and remember the promises of dawn.” —Amanda Moore, author of Requeening: Poems

“Ben Okri is that rare thing, a literary and social visionary, a writer for whom all three—literature, culture, and vision—are profoundly interwoven.” —Ali Smith

“Fiction’s master of enchantments stares down a real horror, and without blinking or flinching, produces a work of beauty, grace, and uncommon power.” —Marlon James