God's Shadow: Sultan Selim, His Ottoman Empire, and the Making of the Modern World (Hardcover) 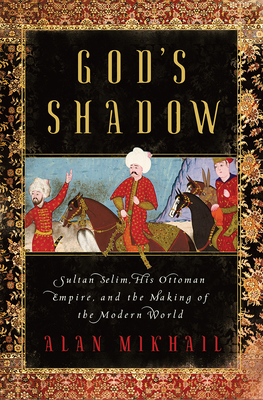 “A stunning work of global history. . . . Alan Mikhail offers a bold and thoroughly convincing new way to think about the origins of the modern world. . . . A tour de force.” —Greg Grandin

Long neglected in world history, the Ottoman Empire was a hub of intellectual fervor, geopolitical power, and enlightened pluralistic rule. At the height of their authority in the sixteenth century, the Ottomans, with extraordinary military dominance and unparalleled monopolies over trade routes, controlled more territory and ruled over more people than any world power, forcing Europeans out of the Mediterranean and to the New World.

Yet, despite its towering influence and centrality to the rise of our modern world, the Ottoman Empire’s history has for centuries been distorted, misrepresented, and even suppressed in the West. Now Alan Mikhail presents a vitally needed recasting of Ottoman history, retelling the story of the Ottoman conquest of the world through the dramatic biography of Sultan Selim I (1470–1520).

Born to a concubine, and the fourth of his sultan father’s ten sons, Selim was never meant to inherit the throne. With personal charisma and military prowess—as well as the guidance of his remarkably gifted mother, Gülbahar—Selim claimed power over the empire in 1512 and, through ruthless ambition, nearly tripled the territory under Ottoman control, building a governing structure that lasted into the twentieth century. At the same time, Selim—known by his subjects as “God’s Shadow on Earth”—fostered religious diversity, welcoming Jews among other minority populations into the empire; encouraged learning and philosophy; and penned his own verse.

Drawing on previously unexamined sources from multiple languages, and with original maps and stunning illustrations, Mikhail’s game-changing account “challenges readers to recalibrate their sense of history” (Leslie Peirce), adroitly using Selim’s life to upend prevailing shibboleths about Islamic history and jingoistic “rise of the West” theories that have held sway for decades. Whether recasting Christopher Columbus’s voyages to the “Americas” as a bumbling attempt to slay Muslims or showing how the Ottomans allowed slaves to become the elite of society while Christian states at the very same time waged the horrors of the transatlantic slave trade, God’s Shadow radically reshapes our understanding of the importance of Selim’s Ottoman Empire in the history of the modern world.

A leading historian of his generation, Alan Mikhail, professor of history and chair of the Department of History at Yale University, has reforged our understandings of the past through his previous three prize-winning books on the history of the Middle East. In writing God’s Shadow, he has drawn on Ottoman Turkish, modern Turkish, Arabic, Spanish, Italian, and French sources. He lives in New York and New Haven, Connecticut.

God’s Shadow is full of fine details of this cross-cultural encounter, but its most arresting aspect is Mikhail’s second claim: that 'the Ottoman Empire made our modern world.' He calls his book 'a revisionist account … demonstrating Islam’s constituent role in forming some of the most fundamental aspects of the history of Europe, the Americas and the United States.' From it, he says, 'a bold new world history emerges, one that overturns shibboleths that have held sway for a millennium. Whether politicians, pundits and traditional historians like it or not, the world we inhabit is very much an Ottoman one'.... The story is always interesting.... The highest praise for a history book is that it makes you think about things in a new way.

Captivating.... A welcome and important corrective, Mikhail's recalibration of the modern era is ambitious and provocative.... Mikhail writes authoritatively, as one would expect from so accomplished a historian. He writes accessibly and vividly, too, which means that the book, while scholarly, is readable, enjoyable, and relatable.... A terrific guide to the Ottomans during a period of profound change.
— Peter Frankopan

[Mikhail] masterfully juxtaposes the triumphs of Selim I’s reign with events taking place elsewhere in the rapidly globalizing world of the early sixteenth century.... God’s Shadow is a revisionist history in the best sense of the term. It offers readers a distinct prism through which to view a familiar and, at times, unfamiliar chronicle of events.... For readers unfamiliar with pre-modern Middle Eastern history, God’s Shadow will be an excellent starting point.... Mikhail’s erudition is global in scope, enabling him to make concrete connections between contemporaneous events in the West and the Middle East.

Mikhail, chair of Yale’s history department and a specialist in Ottoman history, makes it his mission to demonstrate how this utterly compelling leader helped define his age, bending the world to his will. And he succeeds with a flourish.... Mikhail offers a refreshingly Ottoman-centric picture of the 15th- and 16th-century Mediterranean.
— Justin Marozzi

An impressive revisionist history... Mikhail draws on world-spanning source material to demonstrate the enormous, long-felt influence of the Islamic empire... In sharply drawn chapters, many of which contain enough ideas for a separate book, Mikhail restores the Ottoman Empire to its rightful place as a ‘fulcrum’ of global power.... A massively ambitious study, largely accessible and percolating with ideas for further study.
— Kirkus Reviews, starred review

Readers gain insight into the incredible influence of the Ottoman civilization at the dawn of modern history. But Mikhail goes even further, placing Ottoman civilization in its global context. He shows that it is no accident that Columbus’s 1492 voyage coincides with the expulsion of the Jews from Spain, or that Martin Luther could use the Sultan’s long shadow as fuel against the Pope. Global economics and politics are well illuminated, as are the connections and relationships between Eurasia and the Americas. Excellent maps and illustrations throughout detail the cities, societies, and cultural regions in circa 1500.... A wonderful, exciting, engaging, scholarly yet accessible work for all readers of world history, a book that addresses a critical but often overlooked axis of global history.
— Library Journal, starred review

In this revelatory and wide-ranging account, Yale historian Mikhail . . . recreates the life of Sultan Selim I (1470-1520) and makes a convincing case for the outsize impact of the Ottoman Empire and Islamic culture on the history of Europe and the Americas. . . . Mikhail also sheds new light on female political power during the era, and offers intriguing discussions on topics ranging from the Sunni-Shiite split to the discovery of coffee. Written with flair and deep insight, this thought-provoking account is both a major historical work and a genuine page-turner.
— Publishers Weekly, starred review

[A] richly detailed, epic history. . . . The book is notable for its revisionist views of the role of Islam and the empire in defining and shaping the New World. . . . History buffs will doubtless enjoy its challenges and rewards.
— Michael Cart, Booklist

Alan Mikhail is a very original and inventive historian.
— Orhan Pamuk, winner of the Nobel Prize in Literature

The Ottoman Empire lurks behind much of the modern world. Alan Mikhail’s new book makes a great introduction to one of the key figures in Ottoman history, Sultan Selim I.
— Mary Beard, author of SPQR: A History of Ancient Rome

The life of the Ottoman sultan Selim I, as told by the gifted historian Alan Mikhail, is an astonishing and thrilling story, worthy of Game of Thrones. Through a tangle of palace intrigue, war, fratricide, and sheer Machiavellian cunning, Selim rose from obscurity to the pinnacle of world power in the sixteenth century. But the scope of Mikhail’s history is broader than this remarkable individual life. God’s Shadow is a radical revision of the narrative of modern history, a revision that restores the Ottoman empire to the central role it played in provoking Columbus’ voyages, in haunting the fears and ambitions of European nation states, and in profoundly influencing the self-understanding of both Catholics and Protestants. Along the way, Mikhail shows that the Muslim culture over which Selim reigned was in many respects far more progressive, tolerant, and cosmopolitan than anything known in the Christian West.

— Stephen Greenblatt, author of Tyrant: Shakespeare on Politics and The Rise and Fall of Adam and Eve

Alan Mikhail’s bold study of Sultan Selim, his conquests, and reforms rightfully gives the Ottoman Empire and Islam a central place in early modern history. An important book and a lively read as well.
— Natalie Zemon Davis, author of Trickster Travels: A Sixteenth-Century Muslim Between Worlds

— David Levering Lewis, author of God’s Crucible: Islam and the Making of Europe, 570–1215

In vivid prose, Alan Mikhail offers us a history written not from the cramped confines of Europe’s kingdoms but from the heights of the Ottoman Empire, circa 1492. While Sultan Selim and his armies conquered vast swathes of the then-known world, Columbus and a handful of companions looked for a way around the great Muslim power.... God’s Shadow will change how you think about both the past and the present.

— David Nirenberg, author of Neighboring Faiths: Christianity, Islam, and Judaism in the Middle Ages and Today

This deeply researched and elegantly written book restores the Ottoman Empire to its rightful place in world history. [Alan] Mikhail deftly reminds us that leaders outside of Europe had a strong hand in shaping the world as we know it.
— Annette Gordon-Reed, author of The Hemingses of Monticello: An American Family

In God’s Shadow, Alan Mikhail challenges readers to recalibrate their sense of history. In his telling of the age of conquest and exploration, it is the Ottoman Sultan Selim who takes pride of place, not Columbus or Vasco da Gama. This warrior sultan doubled the extent of the already vast domains he ruled over, rendering the empire a tri-continental threat. Mikhail traces the global reverberations of this seismic development from China to Mexico, arguing that the Ottoman sultanate was the pivotal power in a world of ambitious polities.

— Leslie Peirce, author of Empress of the East: How a European Slave Girl Became Queen of the Ottoman Empire

Alan Mikhail’s God’s Shadow is a stunning work of global history. By examining the Catholic Atlantic’s long, vexed engagement with the Islamic Mediterranean, Mikhail offers a bold and thoroughly convincing new way to think about the origins of the modern world.... A tour de force.

— Greg Grandin, author of The Empire of Necessity: Slavery, Freedom, and Deception in the New World

Alan Mikhail astutely
recovers the revealing life of a Turkish sultan who lived in the time of
Columbus. Bent on global power, Selim dramatically expanded his Ottoman Empire
at the expense of eastern neighbors and European Christians.... By exploring
the rivalry and mutual influence of Islam and Christianity in the past, Mikhail
offers fresh insights on our world.
— Alan Taylor, author of Thomas Jefferson’s Education