Protected by the Shadows (An Irene Huss Investigation #10) (Hardcover) 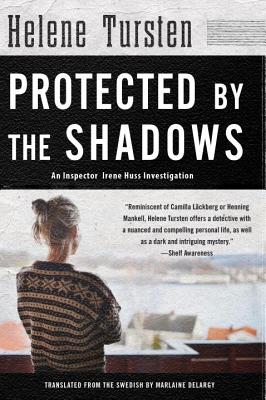 By Helene Tursten, Marlaine Delargy (Translated by)
$26.95
Email or call for price.

This is book number 10 in the An Irene Huss Investigation series.

In this final installment of the internationally bestselling Irene Huss investigations, the Organized Crimes Unit pairs with the Violent Crimes Unit to help defuse the escalating tension between rival gangs in Göteborg, Sweden. But could there be a mole on the force who is thwarting their efforts?

The gang warfare that has been brewing in Göteborg is about to explode. A member of a notorious biker gang has been set on fire—alive. Even in a culture where ritual killings are common, this brutal assault attracts the attention of both Irene’s unit and the Organized Crimes Unit. Anticipating a counterattack, the two units team up to patrol the lavish party of a rival gang, but that doesn’t stop another murder from occurring just outside the event hall.

And that’s not the only thing going up in flames. Someone has planted a bomb under Irene’s husband’s car. Fearing for her family’s safety, Irene sends her husband and daughters into hiding and takes up residence at a colleague’s apartment. Still, she can’t shake the feeling that she is being stalked. Somehow, the gangs are always one step ahead of the police. Someone is leaking information. But who? Irene’s life depends on discovering the answer.

Helene Tursten was a nurse and a dentist before she turned to writing. She is the author of the Irene Huss series, including Detective Inspector Huss, Night Rounds, and Who Watcheth, as well as the short story collection An Elderly Lady Is Up to No Good and Hunting Game, the first mystery featuring Detective Inspector Embla Nyström. Her books have been translated into 18 languages and made into a television series. She was born in Göteborg, Sweden, where she now lives with her husband.

Praise for Protected by the Shadows

"Written in Tursten's familiar straight-ahead style . . . will have you on the edge of your seat."
—The Toronto Star

"Tursten fans will be excited to read this satisfying tenth and final book in her Swedish procedural series."
—Library Journal

“A terrifying look into the life of a police officer more personally involved in a case than she’d like to be.”
—New York Journal of Books

"Tursten keeps the level of suspense high from beginning to end."
—Kittling Books

"[Protected by the Shadows] is a hallmark of sorts in the series, given that it features a tale in which Irene’s two worlds collide dangerously and violently."
—The Book Reporter

"These days Scandinavian crime writers are thick on the ground. It's nice to see that the women can be just as bloodthirsty as the men."
—The New York Times Book Review

"[Tursten] imbues this novel with a cold chill of dread that can't be attributed only to the subfreezing temperatures of Göteborg in winter."
—Chicago Sun Times

"An engaging mystery with a very likable heroine. With a writing style reminiscent of Camilla Läckberg or Henning Mankell, Helene Tursten offers a detective with a nuanced and compelling personal life, as well as a dark and intriguing mystery.”
—Shelf Awareness