So Say the Fallen (The Belfast Novels #6) (Hardcover) 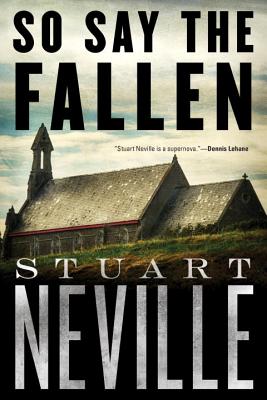 By Stuart Neville
Email or call for price.
Hard to Find

This is book number 6 in the The Belfast Novels series.

A Boston Globe Best Book of the Year

Belfast, Northern Ireland: A man left horrifically maimed by a car accident appears to have taken his own life. It should be an open-and-shut case, but something doesn’t feel right to DCI Serena Flanagan. Flanagan ignores advice to close the case, call it a suicide, and be done with it. As she picks at the threads of the dead man’s life, a disturbing picture emerges, and she realizes the man’s widow, Roberta Garrick, is not what she seems . . .

Stuart Neville is the author of six other books: Ratlines, which was shortlisted for the CWA Ian Fleming Steel Dagger for Best Thriller; Collusion, a finalist for the Los Angeles Times Book Prize; Stolen Souls, which The Guardian said “confirms him as the king of Belfast noir”; The Final Silence, a nominee for the Edgar Award for Best Novel; Those We Left Behind, a New York Times and Boston Globe Best Crime Novel of the Year; and The Ghosts of Belfast, winner of the Los Angeles Times Book Prize and a finalist for the Macavity Award, the Barry Award, and the Anthony Award for Best First Novel. He lives near Belfast.

Praise for So Say the Fallen

"If you haven’t read him yet, now’s the time to start."
—The Boston Globe

"Masterfully captures a sense of the deep evil that humans can summon."
—The Seattle Times

"One of crime fiction’s newest and most complex heroines to come around in years."
—The Strand Magazine

"Neville is skilled and pulls the reader in with this relentless dramatic tale.  It’s a cleverly plotted cat and mouse game."
—WBAI Radio, NYC

"Cements his reputation as one of Ireland’s brightest and best young crime writers."
—The Aptos Times

"[A] complex protagonist whose conflicting impulses provide the energy for a compelling novel of suspense and makes the reader wonder what exactly separates our driven heroine from the calculating killer she's hunting."
—Reviewing the Evidence

"While executing a taut, heart-stopping police procedural, Neville is equally skilled at imbuing the darkest corners of our minds with a bleak beauty of their own, uncovering humanity in the most inhumane of baddies."
—Seattle Review of Books

"What’s there to say besides, Stuart Neville is a fantastic author."
—Suspense Magazine

"It’s easy to see why Neville’s work has been shortlisted for various literary awards on multiple occasions."
—Bookreporter.com

"[A] complex and compassionate study of the human condition."
—Publishers Weekly, Starred Review

“Belfast has been a significant presence in Neville’s mysteries, but this compelling procedural is a more universal tale in which unchecked evil flourishes. Flanagan, a breastcancer survivor undergoing counseling, is a fallible protagonist whose appeal grows with each book; don’t miss her here. ”
—Booklist, Starred Review

“[Neville’s] crime novels, here and in the future, as a way of examining the important question of what makes our lives (and deaths) not only human, but worth the effort.”
—Kingdom Books, Vermont

"One of the best crime novels I read this year. "
—Boomerang Books (Australia)

“Neville’s books are dark but elegantly written case studies of the roots of violence, and here he writes thoughtfully, about children who come from the streets, go through the foster programs and prison systems, and are either reborn or dragged back into the sorrows that are their inheritance.”
—The New York Times Book Review

“Neville has been masterfully capturing the mean streets of Belfast in a series of thrillers, each arguably more powerful than the last. His latest, Those We Left Behind, in which he ups his game by about 10 notches, is a robust police procedural.”
—The Boston Globe

“In the world of modern crime fiction, Stuart Neville is a supernova. I buy his books the day they’re released because I can’t wait to see where he takes me next. And I’m never disappointed.”
—Dennis Lehane, author of World Gone By

“A great, brawling ache of a novel . . . Serena Flanagan [is] the bruised and compassionate hero for whom we’ve all been waiting.”
—Megan Abbott, author of The Fever