The Paper Garden: An Artist Begins Her Life's Work at 72 (Hardcover) 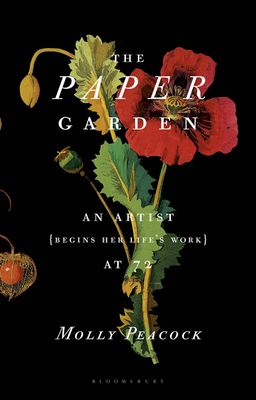 By Molly Peacock
Email or call for price.
Out of Print- Not currently available to order

Mary Delany was seventy-two years old when she noticed a petal drop from a geranium. In a flash of inspiration, she picked up her scissors and cut out a paper replica of the petal, inventing the art of collage. It was the summer of 1772, in England. During the next ten years she completed nearly a thousand cut-paper botanicals (which she called mosaicks) so accurate that botanists still refer to them. Poet-biographer Molly Peacock uses close-ups of these brilliant collages in The Paper Garden to track the extraordinary life of Delany, friend of Swift, Handel, Hogarth, and even Queen Charlotte and King George III.

How did this remarkable role model for late blooming manage it? After a disastrous teenage marriage to a drunken sixty-one-year-old squire, she took control of her own life, pursuing creative projects, spurning suitors, and gaining friends. At forty-three, she married Jonathan Swift's friend Dr. Patrick Delany, and lived in Ireland in a true expression of midlife love. But after twenty-five years and a terrible lawsuit, her husband died. Sent into a netherland of mourning, Mrs. Delany was rescued by her friend, the fabulously wealthy Duchess of Portland. The Duchess introduced Delany to the botanical adventurers of the day and a bonanza of exotic plants from Captain Cook's voyage, which became the inspiration for her art. Peacock herself first saw Mrs. Delany's work more than twenty years before she wrote The Paper Garden, but like a book you know is too old for you, she put the thought of the old woman away. She went on to marry and cherish the happiness of her own midlife, in a parallel to Mrs. Delany, and by chance rediscovered the mosaicks decades later. This encounter confronted the poet with her own aging and gave her-and her readers-a blueprint for late-life flexibility, creativity, and change.

Molly Peacock is the award-winning author of six volumes of poetry, including The Second Blush. Her poems have appeared in the New Yorker, the Paris Review, and the Times Literary Supplement. Among her other works are How to Read a Poem ... and Start a Poetry Circle and a memoir, Paradise, Piece by Piece. Peacock, a member of the Spalding University brief residency MFA graduate faculty, is currently the general series editor of The Best Canadian Poetry in English. A transplanted New Yorker, she lives in Toronto.

“An intriguing, evocative aesthetic experience. A lyrical, meditative rumination on art and the blossoming beauty of self that can be the gift of age and love.”—Kirkus Reviews

“Poet Peacock’s hymn to Delany weaves in her own life and discovery of her subject.”—Publishers Weekly

“If ever a subject and a biographer shared a sensibility, it is the bond between esteemed poet Peacock and the artist Mary Granville Pendarves Delany (1700–1788)… In this lapidary work of creative immersion, Peacock does with words what Delany did with scissors and paper, consummately constructing an indelible portrait of a late-blooming artist, an exalted inquiry into creativity, and a resounding celebration of the ‘power of amazement.’” –Booklist, starred review

“This book layers Delany's life and work over Peacock's. It is organized by flower — forget-me-not, thistle, poppy, etc., each a metaphor for a different phase in Delany's life. In this way, the book itself is a complicated, delicate and beautiful collage.” – Los Angeles Times

“Affecting and engaging, Peacock’s own candor combines with Delany’s wit and honesty to prove that it is never too late to make a life for oneself and to be sustained by art. VERDICT: This marvelous 'mosaick' makes an indelible impression.” – Library Journal, starred review

“[A] fascinating and beautifully made biography … It is filled with wonderfully detailed information about history and art—from the dog wheel that churned butter to the way rag paper was made… [Peacock is] interested in the pathway to art—how Mary's interests in gardening and collecting, and her practice in needlework and painting, laid the groundwork for that moment of revelation… Possessed of a discerning eye, Peacock…lavishes attention on Mary's life, both social and artistic, drenching us in vivid, sensory language as if we were adrift in champagne. The Paper Garden is perfect for the art lover, and for the reader who revels in rich digressive layers that imitate the contours of our lives.” – Cleveland Plain Dealer

“In this lush, humane book, noted poet Molly Peacock shows a terrific hand for crafting prose as she delves into the life of Mary Delany… Peacock bravely uses her exploration of Delany to sidestep or upend the conventional place of the feminine, the craftsy, the domestic… Just as Delany makes a cosmos out of flowers, Peacock makes a cosmos out of her interest in Delany's world. In a remarkable act of observation, recuperation, and assemblage, Peacock weaves her own collage--cutting between Mary Granville's early life and times, her later flowering into art, and Peacock's own journey as a 21st century sympathizer with Mary's loves and ambitions. What emerges is fascinating both because it is surprisingly and keenly observed… To call this book small or quiet would be somehow to belittle what Peacock has so beautifully magnified and made resonant--the triumph of art as a human pursuit, and the curious webs from which both art and craft spring. This book is not flashy, but it is one of the more beautifully constructed and deeply engrossing books I have read in some time. It is a keen reminder of what the fruits of vivid watching--and passionate living--can offer.” – Barnes & Noble Review