The Girl With No Name: The Incredible Story of a Child Raised by Monkeys (Paperback) 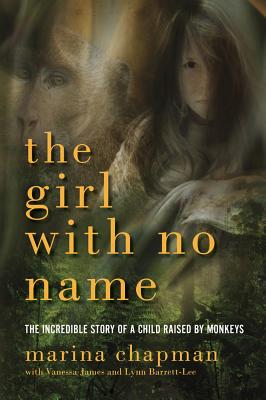 The amazing story of a girl who overcomes unique hardship and deprivation—growing up with a troop of capuchin monkeys—to find ultimate redemption.- As seen on The Today Show

In 1954, in a remote mountain village in South America, a little girl was abducted. She was four years old. Marina Chapman was stolen from her home and then abandoned deep in the Colombian jungle. That she survived is a miracle. Two days later, half-drugged, terrified, and starving, she came upon a troop of capuchin monkeys. Acting entirely on instinct, she tried to do what they did: she ate what they ate and copied their actions, and little by little, learned to fend for herself.

So begins the story of her five years among the monkeys, during which time she gradually became feral; she lost the ability to speak, lost all inhibition, lost any real sense of being human, replacing the structure of human society with the social mores of her new simian family. But her harrowing adventure was only beginning . . .

In the vein of Slumdog Millionaire and City of God, this rousing story of a lost child who overcomes the dangers of the wild and the brutality of the streets to finally reclaim her life will astonish readers everywhere.

Now married to an Englishman and living in Bradford, England, Marina Chapman plans to donate her share of the profits from this book to help finance charities that combat human trafficking and child slavery in Colombia.

Based in Wales, co-author Lynne Barrett-Lee's first novel, Julia Gets a Life, was published by Bantam. Her most recent novel, Barefoot in the Dark, was shortlisted for the inaugural Melissa Nathan Award.

Marina Chapman may live a quiet life now, but the story of her childhood is more akin to a wild fairytale.

This
book, which is as much a memoir about the importance of classification
and belonging as it is about the endurance of the human spirit, will be
enjoyed by those looking for a story of perseverance through even the
greatest obstacles life brings.