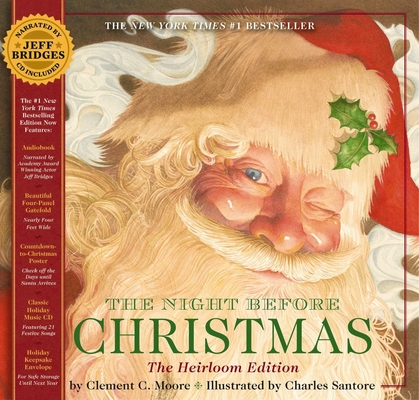 The Night Before Christmas is an enchanting Christmas story that has brought Santa to life for generations, and this #1 New York Times bestselling edition now includes a special reading of this classic poem by Academy Award winner Jeff Bridges.

'Twas the night before Christmas, when all through the house
Not a creature was stirring, not even a mouse

These opening lines from the famous Christmas poem intially published anonymously as A Visit from Saint Nicholas, and credited as a work by Clement Clark Moore, have been inspriring kids and captivating their minds as they prepare for the coming Santa and his reindeer. Carry on a family tradition or start one of your own with this new version of the classic Christmas book for children and families. This family heirloom edition includes:

- A special audio CD featuring a captivating performance of the beloved poem by Jeff Bridges!
- A beautifully designed hardcover with an embossed foil-stamped cover
- A large four-page foldout opens to 42 inches to help immerse you in the story
- An audio CD of classic Christmas music
- A countdown-to-Christmas poster
- A keepsake envelope for safe storage of these festive components year-round
- Lavish illustrations by renowned, New York Times #1 Bestselling artist Charles Santore, the critically-acclaimed illustrator of multiple classic tales, including The Velveteen Rabbit, The Classic Tale of Peter Rabbit, Aesop's Fables, and The Wizard of Oz.
- A nod to Dutch references in the poem, specifically the Dutch name "Donder" which translates to "thunder"

The work of New York Times bestselling children’s book illustrator Charles Santore has been widely exhibited in museums and celebrated with recognitions such as the prestigious Hamilton King Award, the Society of Illustrators Award of Excellence, and the Original Art 2000 Gold Medal from the Society of Illustrators. He is best known for his luminous interpretations of classic children’s stories, including The Velveteen Rabbit, The Classic Tale of Peter Rabbit, Alice's Adventures in Wonderland, The Little Mermaid, Snow White, and The Wizard of Oz.

Clement Clarke Moore, (1779-1863), was a professor at New York City's General Theological Seminary (built on land donated by his father) who, in an 1836 reprint of A Visit From St. Nicholas (more commonly known today as Twas the Night Before Christmas), was first credited as the author of the poem, and later included it in an anthology of his work.

Charles Santore renowned illustrations have been widely exhibited in museums and celebrated with recognitions such as the prestigious Hamilton King Award, the Society of Illustrators Award of Excellence, and the Original Art 2000 Gold Medal from the Society of Illustrators. Santore is best known for his luminous interpretations of classic children’s stories such as Snow White, The Night Before Christmas and Henry Wadsworth Longfellow’s Paul Revere’s Ride, which was named 2004 Children’s Book of the Year for Poetry by the Bank Street College Children’s Book Committee. His illustrations for The Wizard of Oz, which is widely considered to be the quintessential illustrated version, were used as the scenic backdrops for a major television performance of the work.