The Ghosts of Belfast (Paperback) 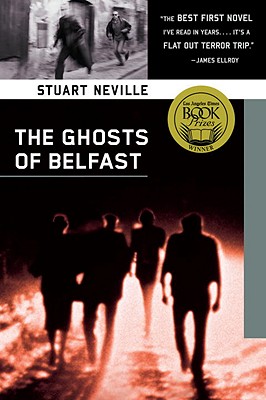 By Stuart Neville
$14.00
Email or call for price

Fegan has been a “hard man,” an IRA killer in northern Ireland. Now that peace has come, he is being haunted day and night by twelve ghosts: a mother and infant, a schoolboy, a butcher, an RUC constable, and seven other of his innocent victims. In order to appease them, he’s going to have to kill the men who gave him orders.

As he’s working his way down the list he encounters a woman who may offer him redemption; she has borne a child to an RUC officer and is an outsider too. Now he has given Fate—and his quarry—a hostage. Is this Fegan’s ultimate mistake?

Stuart Neville is a partner in a multimedia design business based in Armagh, northern Ireland. This novel, also known as The Twelve in the UK and Ireland, is the first in a series.

“Neville’s novel is a coldly lucid assessment of the fragility of the Irish peace … a rare example of legitimate noir fiction.”
—The New York Times Book Review

"Perfect for summer—especially if you want to be reminded of what a blessing it is to live in relatively peaceful times."
—Slate

“Stuart Neville will go far as a writer . . . It’s a wonderful novel, brave and fierce and true to its place and time. I sincerely hope it sells a million copies.”
—Crimespree

Washington Post “Stuart Neville belongs to a younger generation of writers for whom the region's darkest years are history—but that history endures, as his first novel, The Ghosts of Belfast, shockingly demonstrates…. This noir thriller plays out in a Belfast that, even in summer sunshine, remains oppressively gray. The clannishness of its inhabitants is vividly evoked in Neville's descriptions of a tiny rowhouse packed with mourners for a murdered man's wake or a seedy pub where the bartender has learned to look the other way when violence arrives. A riot scene, one of the novel's best, captures a new generation's appetite for blood and an old veteran's nostalgia…. In scene after gruesome scene, Neville attempts to persuade us that this time around, with this repentant murderer, the killing is different.”

“[A] stunning debut.... This is not only an action-packed, visceral thriller but also an insightful insider’s glimpse into the complex political machinations and networks that maintain the uneasy truce in Northern Ireland.”
—Publishers Weekly, Starred Review

“Explosive and absorbing ... The Ghosts of Belfast is an intense meditation on obligation, necessity, and war. Within Stuart Neville’s rich vocabulary, complacency is not a word to be found.”
—Sacramento News and Review

“The Ghosts of Belfast is a tale of revenge and reconciliation shrouded in a bloody original crime thriller.... Fierce dialogue and the stark political realities of a Northern Ireland recovering from the ‘Troubles’ drive this novel. It's not difficult to read this brilliant book as an allegory for a brutal past that must be confronted so the present ‘can be clean.’”
—Milwaukee Journal Sentinel

“In his stunning debut, Stuart Neville delivers an inspired, gritty view of how violence's aftermath lasts for years and the toll it takes on each person involved. The Ghosts of Belfast also insightfully delves into Irish politics, the uneasy truce in Northern Ireland, redemption, guilt and responsibility ... Neville delivers an emotionally packed novel that is both empathetic and savage. Neville never makes Gerry's visions of ghosts seem trite or silly. Like his countryman, John Connolly, Neville keeps the supernatural aspects believable ... The Ghosts of Belfast is a haunting debut.”
—South Florida Sun-Sentinel

“A brilliant thriller: unbearably tense, stomach churningly frightening … a future classic of its time.”
—The Observer

“[Neville] is … uniquely, tragically equipped to be able to think through complex issues of justice and mercy.”
—Irish Times