2,000 Miles Together: The Story of the Largest Family to Hike the Appalachian Trail (Hardcover) 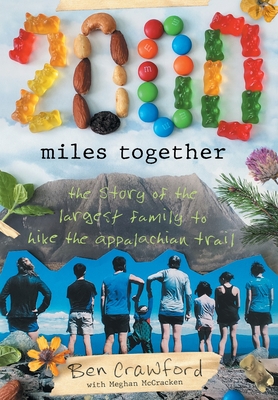 As his six children slept on the dirty floor of a women's restroom while a blizzard howled outside, Ben Crawford had one thought: Have I gone too far?

The next morning, Child Protective Services, along with an armed sheriff, arrived to ask the same question.

2,000 Miles Together is the story of the largest family ever to complete a thru-hike of the Appalachian Trail, defying skeptics and finding friends in the unlikeliest of places. On the trail, Ben Crawford battled not only the many dangers and obstacles presented by the wilderness-snowstorms, record-breaking heat, Lyme disease, overflowing rivers, toothaches, rattlesnakes, forest fires, and spending the night with a cult-but also his own self-doubt. In an effort to bring his family closer together, was he jeopardizing his future relationship with his kids? When the hike was done, would any of them speak to him again?

The Crawford family's self-discovery over five months, thousands of miles, and countless gummy bears proves that there's more than one way to experience life to the fullest. You don't have to accept the story you've been shown. By leaving home, you'll find more than just adventure--you'll find a new perspective on the relationships we often take for granted, and open yourself up to a level of connection you never thought possible.