American Rule: How a Nation Conquered the World but Failed Its People (Hardcover) 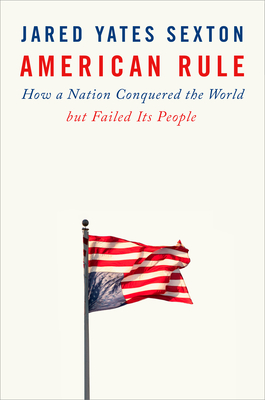 From writer and political analyst Jared Yates Sexton comes an eye-opening journey through American history that unearths and debunks the myths we've always told ourselves.

Recent years have brought a reckoning in America. As rampant political corruption, stark inequality, and violent bigotry have come to the fore, many have faced two vital questions: How did we get here? And how do we move forward?

An honest look at the past—and how it’s been covered up—is the only way to find the answers. Americans in power have abused and subjugated others since the nation’s very beginning, and myths of America’s unique goodness have both enabled that injustice and buried the truth for generations. In American Rule, Jared Yates Sexton blends deep research with stunning storytelling, digging into each era of growth and change that led us here—and laying bare the foundational myths at the heart of the American imagination.

Stirring, unequivocal, and impossible to put down, American Rule tells the truth about what this nation has always been—and challenges us to forge a new path.

Jared Yates Sexton is the author of The Man They Wanted Me to Be and The People Are Going to Rise Like the Waters Upon Your Shore. His political writing has appeared in publications including The New York Times, The New Republic, Politico, and Salon.com. Sexton is also the author of three collections of fiction and is an associate professor of creative writing at Georgia Southern University.

“If you enjoy writer and political analyst Jared Yates Sexton's tweets, you'll appreciate his new book, American Rule: How a Nation Conquered the World but Failed Its People. It focuses on the events in history that led us to where we are today—a nation that repeatedly claims ‘this is not who we are’ when this is, actually, how we are.”—Marie Claire, “Best Political Books of 2020”

“Exceptional . . . Think of American Rule as a modern companion to Howard Zinn's A People's History of the United States—books that, if our public education system was honest with itself, would be required in high school curriculum.”—Big Think

“Jared Yates Sexton unmasks the horrors of the Trump era—and the fictions that have been created to whitewash them—by rooting them in the stories we have told ourselves for two centuries to hide away the white supremacy, violent conquest and subjugation, xenophobia, nativist nationalism, and plutocracy that have periodically darkened our history. A historical strip-mining that’s as brutal as the past it uncovers—and the present political moment it lays bare.”—Greg Sargent, author of An Uncivil War: Taking Back Our Democracy in an Age of Trumpian Disinformation and Thunderdome Politics

“Coming to terms with the aftermath of Trump’s election in 2016, Jared Yates Sexton, like so many, realized he had been taught a deeply partial version of American history, one that couldn’t explain where the country had suddenly found itself. Impressively researched, vividly written, impassioned, and ambitious, American Rule tells the other side of the story, offering a counter-history that resists received narratives and takes a bold, urgent step toward reframing the histories of America the nation chose to tell itself.”—Sarah Churchwell, author of Behold, America: The Entangled History of “America First” and “the American Dream”

“[American Rule] surveys the leaders and policies of American rule from the Founding Fathers to now, laying bare a collective, consistent, centuries-long gaslighting of the American people. . . . Sexton’s writing is to be praised for its lack of equivocation. He calls the immoral immoral, the unethical unethical. The reading is uncomfortable yet necessary. Sexton’s well-executed project of looking at American history with radical candor is meant to make us more patriotic, not less; only with clear eyes do we have a chance of fulfilling America’s promise.”—Booklist (starred review)

“Sexton, a professor of creative writing at Georgia Southern University, exposes the myth of American exceptionalism in this searing account. . . . Sexton’s survey of American political history is taut and tart. . . . An unflinching and well-crafted takedown of the nationalist rhetoric that fueled Trump’s rise.”—Publishers Weekly

“Sexton continues to serve as a historical myth buster, tackling the belief of America as a fair and just government of the people, and portraying instead a broken system built by and for white elites. . . . Sexton is effective at drawing parallels between contemporary politics and historic events. . . . Recommended primarily for those concerned by the tone and direction of American politics and seeking a better understanding of the question on which the book is framed: ‘How did we get here?’”—Library Journal

“A ‘chronicle of oppression’ that makes a rousing counter to the usual celebratory narratives of the American past.”—Kirkus Reviews