Notes from a Young Black Chef: A Memoir (Hardcover) 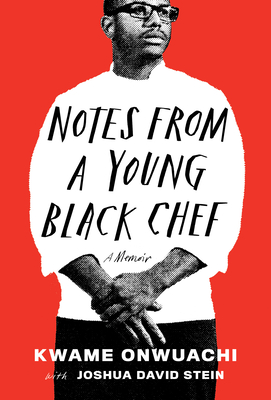 By the time he was twenty-seven years old, Kwame Onwuachi (winner of the 2019 James Beard Foundation Award for Rising Star Chef of the Year) had opened—and closed—one of the most talked about restaurants in America. He had launched his own catering company with twenty thousand dollars that he made from selling candy on the subway, yet he’d been told he would never make it on television because his cooking wasn’t “Southern” enough. In this inspiring memoir about the intersection of race, fame, and food, he shares the remarkable story of his culinary coming-of-age.

Growing up in the Bronx, as a boy Onwuachi was sent to rural Nigeria by his mother to “learn respect.” However, the hard-won knowledge gained in Africa was not enough to keep him from the temptation and easy money of the streets when he returned home. But through food, he broke out of a dangerous downward spiral, embarking on a new beginning at the bottom of the culinary food chain as a chef on board a Deepwater Horizon cleanup ship, before going on to train in the kitchens of some of the most acclaimed restaurants in the country and appearing as a contestant on Top Chef.

Onwuachi’s love of food and cooking remained a constant throughout, even when he found the road to success riddled with potholes. As a young chef, he was forced to grapple with just how unwelcoming the world of fine dining can be for people of color, and his first restaurant, the culmination of years of planning, shuttered just months after opening. A powerful, heartfelt, and shockingly honest story of chasing your dreams—even when they don’t turn out as you expected—Notes from a Young Black Chef is one man’s pursuit of his passions, despite the odds.

“This is an astonishing and open-hearted story from one of the next generation’s stars of the culinary world. I am so excited to see what the future holds for Chef Kwame—he is a phoenix, rising into better and better things and showing us all what it means to be humble, hungry, and daring.” —José Andrés

Kwame Onwuachi is the James Beard Award-winning executive chef at Kith/Kin in Washington, D.C. He was born on Long Island and raised in New York City, Nigeria, and Louisiana. Onwuachi was first exposed to cooking by his mother, in the family’s modest Bronx apartment, and he took that spark of passion and turned it into a career. From toiling in the bowels of oil cleanup ships to working at some of the best restaurants in the world, he has seen and lived his fair share of diversity. Onwuachi trained at the Culinary Institute of America and opened five restaurants before turning thirty. A former Top Chef contestant, he has been named Esquire’s Chef of the Year, one of Food & Wine’s Best New Chefs, and a 30 Under 30 honoree by both Zagat and Forbes.

An IACP Award finalist
Longlisted for The Art of Eating Prize

“Fierce and inspiring. . . . This rip-roaring tale of ambition is also a sobering account of racism in and out of the food industry.” —The New York Times Book Review

“Notes From a Young Black Chef might be the literary heir to Kitchen Confidential. In the spirit of Bourdain’s no-holds-barred culinary-lit classic [it] unspool[s] the chef’s life story with the same mix of brutal honesty, behind-the-scenes anecdotes, and atmosphere-conjuring prose. But Onwuachi’s story is completely his own. . . . A gripping account of an already extraordinary life.” —Entertainment Weekly

“A young black chef’s raw and gritty tale of survival, ingenuity, and hustling. Kwame takes us on this journey where he eventually finds himself captivated by the culinary world of fine dining. A fast-paced page turner with inspirational recipes at the end of each chapter.” —Carla Hall, author of Carla Hall’s Soul Food: Everyday and Celebration

“Onwuachi’s memoir should be required reading, not just for future chefs, but for anyone who wants a glimpse into one man’s tale of what it’s like to be young, black and ambitious in America.” —The Washington Post

“Kwame Onwuachi has given us something to crave. A culinary autobiography sitting at the crossroads of West Africa, the American South, and the Caribbean and beyond mixed with his journey to find himself and the flavors that make him unique. This is the future of Black food writing and a new chapter in the saga of how chefs come of age.” —Michael W. Twitty, author of The Cooking Gene: A Journey Through African American Culinary History in the Old South

“Engaging and well crafted. . . . Onwuachi’s vision as a chef is inspired by his desire to make the fine-dining dishes he wants in a country that many insiders and investors argue isn’t ready for a black chef making anything beyond upscale versions of fried chicken and macaroni and cheese.” —Minneapolis Star Tribune

“With Notes From a Young Black Chef, Kwame Onwuachi proves that 29 isn’t too young to write a memoir.” —Eater

“This book is a testament to the old adage, ‘it’s not how hard you hit but how you respond after being hit.’ Chef Kwame Onwuachi is a living example of bouncing back when hit with challenges and obstacles. Notes from a Young Black Chef is an inspiring tell-all about the reality of being a young Black chef in the world of fine dining and all the roads taken to become a culinary sensation.” —Edouardo Jordan, chef/owner of Salare, Junebaby, and Lucinda Grain Bar

“In a decade, when fine dining restaurant kitchens are filled with—and run by—Black people wearing chef whites, Kwame Onwuachi’s book will have everything to do with it. He spares nothing, not his own pride or his rightful frustration with an industry that marginalizes people of color in visible positions, to craft a memoir that’s both powerful in the present and a beacon for the road ahead.” —Kat Kinsman, author of Hi, Anxiety: Life With a Bad Case of Nerves

“Kwame is a chef giving a lot more than notes in this remarkable story. His candor and refreshing point of view tell a story of guts and passion from a chef who translates his expertise, where we all can learn from his stories.” —Joseph “JJ” Johnson, chef/founder, Fieldtrip and Henry at Life Hotel

“It may seem unusual for one so young to pen a memoir. However, Kwame Onwuachi has lived two or three lifetimes in his journey thus far and recounts them with humor, insight, and honesty in Notes from a Young Black Chef. It’s Kitchen Confidential from a Black point of view.” —Jessica B. Harris, author of My Soul Looks Back

“You couldn’t ask the universe for a more colorful creative culinary adventurer than chef Kwame, who blends the stories and history of his African and African American heritage into a literary pot of brilliant cultural flavors. An amazing recipe of a life lived to the fullest, Notes from a Young Black Chef is seasoned with herbs of pain, hardship, abuse, and confusion but also infused with the flavors of joy, triumph, excitement, challenge, and winning.” —Alexander Smalls, coauthor of Between Harlem and Heaven

“Still under 30, [Onwuachi] has already had a lifetime of career highs and lows, making for an engaging account.” —Library Journal

“Eat this book! It satiates all five taste points. It is a generational cultural roux; dusky dark, and deeply flavored. Kwame Onwuachi is a ravenous chef. His appetite for culinary expression and insistence on bringing that gift forward to the feeding of our minds, as well as our bellies, inspires and motivates across all disciplines.” —Alfre Woodard