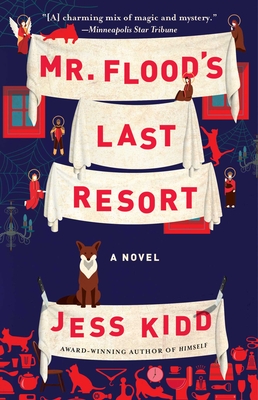 Cathal Flood, horder and all around curmudgeon is trying to keep his son from sending him to an old folks home. Maud Drennan is his caregiver, who is charged with getting his house in order. No matter how hard Mr. Flood tries to get rid of Maud, they somehow begin to bond. This charming mystery is funny and poignant.

“Jess Kidd has done it again. I absolutely loved her first book, Himself, and her latest does not disappoint. This tale of Mr. Flood and his caregiver, Maud, brings together eccentric characters, ghosts, saints, a crumbling mansion, missing children, and a suspicious suicide. It perfectly balances tragedy with dark comedy; the dialogue crackles and every detail enchants. I will miss spending time in Maud's world.”
— Kathi Kirby, Powell's Books, Inc, Portland, OR

“Move over Ove, there is a new cranky old man in town. And what a feat of imagination is Mr. Cathal Flood! Swathed in layers of cardigans, he lives in a vast estate populated by cats and a pet fox named Larkin, where rooms of antique taxidermy and Victorian curiosities are barricaded by walls of ancient National Geographics and family mysteries abound. Into this situation comes Maud, a caretaker with secrets of her own and several saints literally watching over her. Magical and joyous, beautifully inventive, with sparkling dialogue and the perfect balance between dark humor and heartfelt sorrow, this book proclaims Jess Kidd (author of Himself) as a writer to cheer.”
— Yvette Olson, Magnolia's Bookstore, Seattle, WA

Note to readers: In the UK, this book is published under the title The Hoarder.

From the award-winning author of Himself comes a spellbinding and “magically entertaining read” (Good Housekeeping, UK) about a lonely caregiver and a cranky hoarder with a house full of secrets that “will appeal to fans of Tana French and Sophie Hannah, as it charms and unsettles in equal measure” (BookPage).

Maud Drennan is a dedicated caregiver whose sunny disposition masks a deep sadness. A tragic childhood event left her haunted, in the company of a cast of prattling saints who pop in and out of her life like tourists. Other than visiting her agoraphobic neighbor, Maud keeps to herself, finding solace in her work and in her humble existence—until she meets Mr. Flood.

Cathal Flood is a menace by all accounts. The lone occupant of a Gothic mansion crawling with feral cats, he has been waging war against his son’s attempts to put him into an old-age home and sent his last caretaker running for the madhouse. But Maud is this impossible man’s last chance: if she can help him get the house in order, he just might be able to stay. So the unlikely pair begins to cooperate, bonding over their shared love of Irish folktales and mutual dislike of Mr. Flood’s overbearing son.

Mr. Flood’s Last Resort is “a rare delight” (Cosmopolitan, UK) examining the space between sin and sainthood, a novel that “perfectly balances tragedy with dark comedy” in which “the dialogue crackles and every detail enchants” (Shelf Awareness).

Jess Kidd is the award-winning author of Himself, Mr. Flood’s Last Resort, and Things in Jars. She has a PhD in creative writing from St. Mary’s University in London. She grew up as part of a large family from Ireland’s County Mayo and now lives in London with her daughter. Her first book, Himself, was shortlisted for the Irish Book Awards. Learn more at JessKidd.com.

"Jess Kidd delivers another charming mix of magic and mystery, this time wrapped around a tale of family love and dysfunction...The action-packed climax leaves us with the whiff of a sequel. We can only hope it will come soon."—Minneapolis Star Tribune

"The gothic plot of this murder mystery (following Himself) about an Irish caregiver and her client, a cantankerous, widowed hoarder, boasts Kidd’s darkly comic sensibility, atmospheric writing, and colorful characters...there are plenty of twists and perilous turns to keep the narrative moving. Kidd’s novel features a winning combination of descriptive writing, black humor, and biting dialogue." —Publishers Weekly

"Irish magical realism saturates this double mystery with saints, mistaken identities, and a hoarder’s creepy house… The author of Himself has prepared a fine Irish feast for the literary crowd; she simultaneously delights and appalls with her odd and troubled characters, never resorting to formula."—Library Journal

"[This] compelling second novel weaves love, betrayal, and forgiveness with humor, mystery, and a bit of magic...[an] absorbing mix of paranormal tragedy and heartfelt triumph will appeal to a broad swath of readers.” —Booklist

"It won’t be like any other novel you’ve read this year—or maybe ever—but it’s worth it."—Kirkus

"Jess Kidd’s mysteries refuse to conform to genre in the most delicious of ways. She sculpts her imaginative storylines with a deft hand managing to bring otherworldly elements into the intriguing mystery at the center of her plot."
—Electric Literature

“A magically entertaining read…Jess Kidd has a gift for creating characters you’ll love with a few cleverly chosen words.” —Good Housekeeping (UK), Book of the Month

"An enchanting thriller that disarms and delights...will appeal to fans of Tana French and Sophie Hannah, as it charms and unsettles in equal measure."—BookPage