The Pianist from Syria: A Memoir (Paperback) 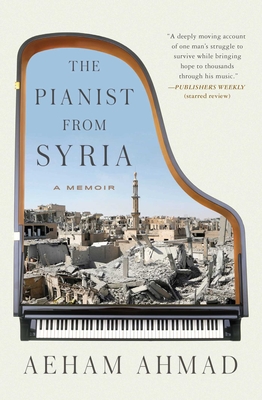 By Aeham Ahmad, Emanuel Bergmann (Translated by)
$17.00
Available - On our shelves now

This astonishing true story presents an “affecting viewpoint on life in Syria before and in the midst of extreme violence” (Booklist), offering a deeply personal and unique perspective on one of the most devastating refugee crises of this century.

Aeham Ahmad was born a second-generation refugee—the son of a blind violinist and carpenter who recognized Aeham’s talent and taught him how to play piano and love music from an early age. When his grandparents and father were forced to flee Israel and seek refuge from the conflict ravaging their home, Aeham’s family built a life in Yarmouk, an unofficial camp to more than 160,000 Palestinian refugees in Damascus.

As a devoted family, they waited for the conflict to be resolved so they could return to their homeland. Their only haven was in music and in each other, especially when another deadly fight overtook their asylum. Forced to leave his family behind, Aeham sought out a safe place for them to call home and build a better life, taking solace in his indestructible familial bond to keep moving forward.

Heart-wrenching yet ultimately optimistic and told in a raw and poignant voice, The Pianist from Syria is a “deeply moving account of one man’s struggle to survive while bringing hope to thousands through his music” (Publishers Weekly, starred review).

Aeham Ahmad was born in Yarmouk, a suburb of Damascus. His father encouraged his musical talent, and at age seven, he began piano lessons at the Arab Institute in Damascus. He later studied music education in Homs and worked as a music teacher. In 2015, he fled to Germany because of the war in Syria. Today. he lives with his family in Wiesbaden and gives concerts all over Europe. In December 2015, Ahmad was awarded the International Beethoven Prize for Human Rights. The Pianist from Syria is his first book.

Emanuel Bergmann was born in Germany and is a journalist and translator. He has been living in Los Angeles since 1990. His first novel, The Trick, was an international bestseller.

"A deeply moving account of one man's struggle to survive while bringing hope to thousands through his music."— Publishers Weekly (starred review)

"Well-rendered and affecting, this is a fine delineation of the plight of an unwitting protagonist in the Syrian conflagration." —Kirkus Reviews

"A unique and affecting viewpoint on life in Syria before and in the midst of extreme violence."— Booklist