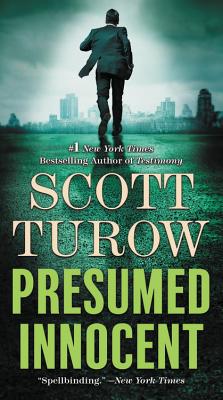 Hailed as the most suspenseful and compelling novel in decades, PRESUMED INNOCENT brings to life our worst nightmare: that of an ordinary citizen facing conviction for the most terrible of all crimes. It's the stunning portrayal of one man's all-too-human, all-consuming fatal attraction for a passionate woman who is not his wife, and the story of how his obsession puts everything he loves and values on trial--including his own life. It's a book that lays bare a shocking world of betrayal and murder, as well as the hidden depths of the human heart. And it will hold you and haunt you...long after you have reached its shattering conclusion.

Scott Turow is the author of many bestselling works of fiction, including Testimony, Identical, Innocent, Presumed Innocent, and The Burden of Proof, and two nonfiction books, including One L, about his experience as a law student. His books have been translated into more than forty languages, sold more than thirty million copies worldwide, and have been adapted into movies and television projects. He has frequently contributed essays and op-ed pieces to publications such as the New York Times, Washington Post, Vanity Fair, The New Yorker, and The Atlantic.