Futbolera: A History of Women and Sports in Latin America (Paperback) 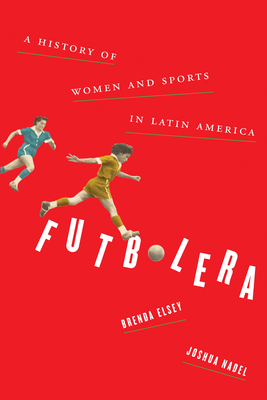 <p>Latin American athletes have achieved iconic status in global popular culture, but what do we know about the communities of women in sport? <i>Futbolera</i> is the first monograph on women&#x2019;s sports in Latin America. Because sports evoke such passion, they are fertile ground for understanding the formation of social classes, national and racial identities, sexuality, and gender roles. <i>Futbolera</i> tells the stories of women athletes and fans as they navigated the pressures and possibilities within organized sports.</p><p> <i>Futbolera</i> charts the rise of physical education programs for girls, often driven by ideas of eugenics and proper motherhood, that laid the groundwork for women&#x2019;s sports clubs, which began to thrive beyond the confines of school systems. <i>Futbolera</i> examines how women challenged both their exclusion from national pastimes and their lack of access to leisure, bodily integrity, and public space. This vibrant history also examines women&#x2019;s sports through comparative case studies of Argentina, Brazil, Chile, Costa Rica, Mexico, and others. Special attention is given to women&#x2019;s sports during military dictatorships of the 1970s and 1980s as well as the feminist and democratic movements that followed. The book culminates by exploring recent shifts in mindset toward women&#x2019;s football and dynamic social movements of players across Latin America.</p>

Brenda Elsey is an associate professor of history at Hofstra University and the author of Citizens and Sportsmen: Fœtbol and Politics in Twentieth-Century Chile. In addition to numerous scholarly articles on politics and popular culture in Latin America, her writing has appeared in the Guardian, The New Republic, and Sports Illustrated. She co-hosts the weekly feminism and sports podcast Burn It All Down.

Joshua Nadel is an associate professor of Latin American and Caribbean history at North Carolina Central University. He is the author of Fútbol! Why Soccer Matters in Latin America as well as numerous scholarly book chapters. He has published essays in Foreign Policy, the Washington Post's newsletter Monkey Cage, Z—calo Public Square, and the Telegraph (London).

Through their research, [Elsey and Nadel] navigate the challenge of reconstructing a largely forgotten, underground history…an important contribution not just to sports history, but to Latin American history as a whole.
— Americas Quarterly

Futbolera offers a compendium of individual, institutional, and state efforts designed to support or to undermine women’s soccer in Argentina, Chile, Brazil, Central America, and Mexico. After reading Elsey and Nadel’s book, it is impossible to plead ignorance to the fact that women have been playing soccer across Latin America for well over a century and that, to play their sport, these athletes have had to battle powers that wanted to keep them out of the game.
— Public Books

This well-written and meticulously researched history helps us understand the past, moving the female body out of the silence enforced upon it. History may have attempted to write women out of the story of sports in Latin America, but Futbolera puts the ball back in women's possession.
— All Heels on Deck

While sports has often been sidelined in histories of gender, class, nationalism, and the so-called Social Question in the region, Elsey and Nadel show how women’s involvement in sports animated eugenic debates over healthy citizens, nationalism, and proper motherhood in government, the Church, and the press.
— New Books Network: Latin American Studies

This book is a pure delight to read and provides tremendous new information on the struggles that the women's game has faced over the years throughout Central and South America…one of the best books ever written on international women's football.
— Tribal Football

[Futbolera] provides a critical contribution to the growing literature on the international nature of women's sports…A must read for anyone interested in soccer history.
— CHOICE

Futbolera…has opened a path for further social and historical research into the amazing but often neglected world of women's sports in Latin America…Futbolera is as much a pleasant read for the general public as it is an essential tool for scholars who, at any stage of their careers, look to understand the complex relationships between gender, sports and political structures within any Latin American context.
— International Journal of the History of Sport

[A] far-reaching work…[Futbolera gives] a broad understanding of public and politically motivated conceptions that continue to restrict funding and support for women’s sports, in spite of the rich histories and hard-won success stories that have occurred previously.
— Journal of Latin American Studies

Futbolera is an eminently readable work and should be considered both by academics and soccer fans. Elsey and Nadel wrote in their introduction that 'History telling can confer legitimacy on its subjects,' and in their work, [they] have done a fine job of providing that service to the women who struggled against considerable odds to play the game they loved.
— Sport in American History

Elsey and Nadel have published a foundational text for Latin American history and for the histories of women and sport...The book is accessible to undergraduate students while providing sustenance for scholars of sport, women, gender, and Latin America.
— The Americas

Futbolera is a welcome contribution to the growing scholarship on sports in Latin America...Elsey and Nadel have not designed the book to be an authoritative treatment but a beginning; they have afforded readers a framework for understanding women’s experience with sports, a set of questions to pursue, and spaces both geographic and substantive to fill. As such, Futbolera is an invaluable contribution to the study of Latin American sports and, therefore, to understanding the region’s history beyond the playing field.
— Hispanic American Historical Review

This pioneering study of the trajectory of women’s sport in Latin America exemplifies the multiple riches to be gained from the comparatively recent reappraisal of sports history within the continent…[Elsey and Nadel's] juxtaposition of female participation in football, other sports, and societal trends exposes the ongoing fickleness of broader attitudes towards women and physicality.
— Bulletin of Latin American Research

Elsey and Nadel masterfully traverse the waters of women’s discrimination and agency through sport...Futbolera is a solid piece of scholarship. The book offers a captivating view of women’s agency, solidarity, persistence, and impact in regions known for their strong patriarchy. More than a work to encourage further research, Futbolera is a true achievement for both Latin American and women’s studies, well suited for beginner and advanced researchers.
— Journal of Sport History