Desert Solitaire: A Season in the Wilderness (MP3 CD) 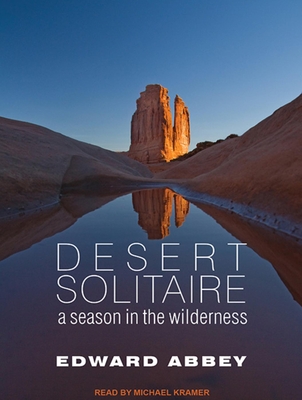 By Edward Abbey, Michael Kramer (Narrated by)
Email or call for price.
Special Order - Not currently available to order

When Desert Solitaire was first published in 1968, it became the focus of a nationwide cult. Rude and sensitive. Thought-provoking and mystical. Angry and loving. Both Abbey and this book are all of these and more. Here, the legendary author of The Monkey Wrench Gang, Abbey's Road, and many other critically acclaimed books vividly captures the essence of his life during three seasons as a park ranger in southeastern Utah. This is a rare view of a quest to experience nature in its purest form-the silence, the struggle, the overwhelming beauty. But this is also the gripping, anguished cry of a man of character who challenges the growing exploitation of the wilderness by oil and mining interests, as well as by the tourist industry.Abbey's observations and challenges remain as relevant now as the day he wrote them. Today, Desert Solitaire asks if any of our incalculable natural treasures can be saved before the bulldozers strike again.

Edward Abbey (1927-1989) authored many books during his lifetime, including "The Monkey Wrench Gang" and "The Fool's Progress."

Audiobook veteran Michael Kramer has recorded more than two hundred audiobooks for trade publishers and many more for the Library of Congress Talking Books program. An "AudioFile" Earphones Award winner and an Audie Award nominee, he earned a "Publishers Weekly" Listen-Up Award for his reading of "Savages" by Don Winslow.

"Like a ride on a bucking bronco . . . rough, tough, combative. The author is a rebel and an eloquent loner. His is a passionately felt, deeply poetic book . . . set down in a lean, racing prose, in a close-knit style of power and beauty." ---The New York Times Book Review