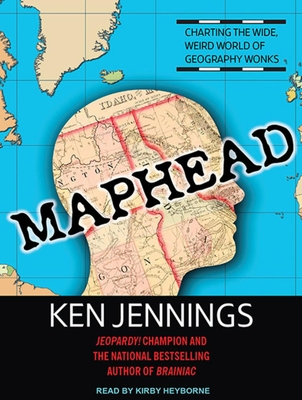 By Ken Jennings, Kirby Heyborne (Narrated by)
Email or call for price.
Out of Print

It comes as no surprise that, as a kid, Jeopardy legend Ken Jennings slept with a bulky Hammond world atlas by his pillow every night. Maphead recounts his lifelong love affair with geography and explores why maps have always been so fascinating to him and to fellow enthusiasts everywhere. Jennings takes listeners on a world tour of geogeeks from the London Map Fair to the bowels of the Library of Congress, from the prepubescent geniuses at the National Geographic Bee to the computer programmers at Google Earth. Each chapter delves into a different aspect of map culture: highpointing, geocaching, road atlas rallying, even the "unreal estate" charted on the maps of fiction and fantasy. He also considers the ways in which cartography has shaped our history, suggesting that the impulse to make and read maps is as relevant today as it has ever been. From the "Here be dragons" parchment maps of the Age of Discovery to the spinning globes of grade school to the postmodern revolution of digital maps and GPS, Maphead is filled with intriguing details, engaging anecdotes, and enlightening analysis. If you're an inveterate map lover yourself-or even if you're among the cartographically clueless who can get lost in a supermarket-let Ken Jennings be your guide to the strange world of mapheads.

Ken Jennings, best known as the winner of seventy-four games on the television show "Jeopardy!," is the bestselling author of "Brainiac: Adventures in the Curious, Competitive, Compulsive World of Trivia Buffs" and "Ken Jennings's Trivia Almanac."

Kirby Heyborne, an accomplished actor, musician, and comedian, has received a number of "AudioFile" Earphones Awards and has narrated such titles as "Nick and Nora's Infinite Playlist" by Rachel Cohn and David Levithan, "Black Swan Green" by David Mitchell, and "The Genius" by Jesse Kellerman.

"[Jennings is] alive to the larger meaning of maps as they overlay knowledge, desire, and aspiration onto the mute reality of terrain. The result is a delightful mix of lore and reportage that illuminates the longing to know where we are." ---Publishers Weekly Starred Review