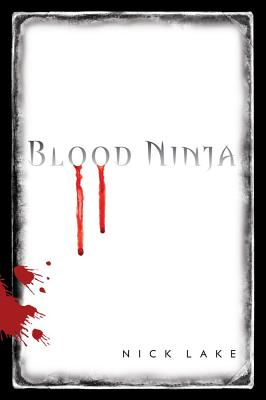 Could Taro, a fisherman’s son, be destined for greatness? In the course of a day, Taro’s entire life changes: His father is murdered before his eyes, and Taro is taken by a mysterious ninja on a perilous journey toward safety. Someone wants Taro dead, but who—and why? With his best friend, Hiro, and their ninja guide, Shusaku, Taro gets caught in the crossfire of a bitter conflict between rival lords for control of imperial Japan. As Taro trains to become a ninja himself, he’s less and less sure that he wants to be one. But when his real identity is revealed, it becomes impossible for Taro to turn his back on his fate.

Nick Lake is a children’s book editor at Harper UK. He received his degree in English from Oxford University. His Blood Ninja trilogy was inspired by his interest in the Far East, and by the fact that he is secretly a vampire ninja himself. Nick lives with his wife and daughter in England. Visit him on Twitter @NickLakeAuthor.

“The night has a new hero.”—Darren Shan, author of the Cirque Du Freak series

“A fast-paced, gripping book about ninjas. It’s all I ask for, really.”—Conn Iggulden, coauthor of The Dangerous Book for Boys

“An elegantly thrilling and action-packed tale of honor, duty, and destiny.”


“Deftly blends sixteenth-century Japanese samurai history with vampire mythology to concoct a gory and fast-paced adventure that will grab readers...the cliff-hanger ending will leave readers clamoring for a sequel.”—Booklist

“Lake uses the story's familiar elements skillfully, combining them into an imaginative and original whole. And, really, with vampire ninjas, how can you lose?”—Publishers Weekly

“Those who enjoy Far Eastern-tinged quest stories—with a dash of vampires and ninjas for flavor—will find much to enjoy here.”—VOYA