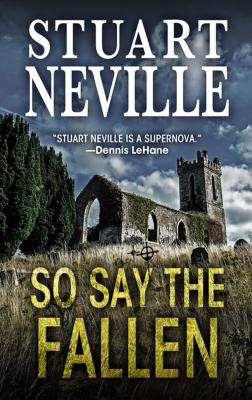 By Stuart Neville
Email or call for price.
Special Order

Henry Garrick, a local car dealer who was maimed in an accident five months before, has apparently taken his own life. A simple case, it should be wrapped up in a few days. But something doesn t feel right to Belfast detective Serena Flanagan, despite the fact that there is no evidence of foul play.
As she investigates, Flanagan interviews Roberta Garrick, Henry's widow, who is comforted in her grief by Reverend Peter McKay, rector of the local church and a close family friend. Flanagan is carrying heavy personal burdens, her mind and marriage nearly at breaking point, and on impulse she confides in the rector, seeking his spiritual help. But with the secrets McKay is keeping, he is in no position to help anyone. His faith long gone, he is lost in a spiral of lust and guilt from which he sees no escape. Until, that is, the policewoman offers him a glimpse of salvation.
Flanagan ignores her superiors advice to close the case, call it a suicide, and be done with it. As she picks at the threads of the dead man's life, a disturbing picture emerges, and she realizes the widow Roberta Garrick is not what she seems . . .

Stuart Neville is the author of six other books: Ratlines, which was shortlisted for the CWA Ian Fleming Steel Dagger for Best Thriller; Collusion, a finalist for the Los Angeles Times Book Prize; Stolen Souls, which The Guardian said confirms him as the king of Belfast noir; The Final Silence, a nominee for the Edgar Award for Best Novel; Those We Left Behind, a New York Times and Boston Globe Best Crime Novel of the Year; and The Ghosts of Belfast, winner of the Los Angeles Times Book Prize and a finalist for the Macavity Award, the Barry Award, and the Anthony Award for Best First Novel. He lives near Belfast. From the Hardcover edition."