The Adventures of John Blake: Mystery of the Ghost Ship (Hardcover) 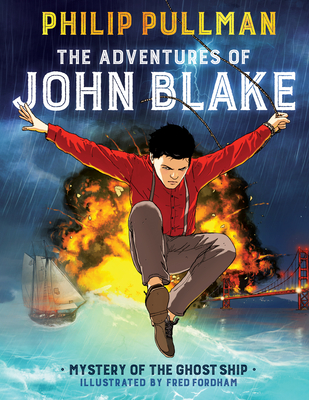 Mystery, history and high seas, globe-trotting adventure fill this thriller of a graphic novel by the author of The Golden Compass. It feels like a Jason Bourne story with ghosts. So good!

Trapped in the mists of time by a terrible research experiment gone wrong, John Blake and his mysterious ship are doomed to sail between the centuries, searching for a way home. In the ocean of the modern day, John rescues a shipwrecked young girl his own age, Serena, and promises to help.

But returning Serena to her own time means traveling to the one place where the ship is in most danger of destruction. The all-powerful Dahlberg Corporation has an ambitious leader with plans far greater and more terrible than anyone has realized, and he is hot on their trail. For only John, Serena, and the crew know Dahlberg's true intentions, and only they have the power to stop him from bending the world to his will . . .

Philip Pullman is the internationally acclaimed author of many books for children and adults, including the forthcoming Book of Dust. His trilogy His Dark Materials has been published in more than forty languages, has sold close to 17.5 million copies worldwide, and won innumerable awards and accolades. The Golden Compass was named an "All-Time Greatest Novel" by Entertainment Weekly and a "Top 100 Book of All Time" by Newsweek. The Adventures of John Blake: Mystery of the Ghost Ship is his first original graphic novel.

Fred Fordham first discovered comics after reading Marjane Satrapi’s Persepolis. That book sparked an interest in the form generally but particularly in the French Bande Dessinee tradition. His first graphic novel, Nightfall, was published in France. He has also written and illustrated strips for David Lloyd's online comics-art magazine, Aces Weekly, and worked as an illustrator for The Phoenix comic.

Praise for The Adventures of John Blake: Mystery of the Ghost Ship:

* “With obvious affection for Tintin, Pullman threads this complicated skein of plot with customary measures of awe and menace... he proves an expert visual storyteller. Fordham animates with characters who have the detail and agility of a Studio Ghibli cast... Anything new from Pullman is big news, and his first original graphic novel won't disappoint.” -- Booklist, starred review

* "The various plot threads coalesce into a powerful tale, with the artwork creating a soaring, cinematic feel. A modern seafaring epic, highly recommended for all Pullman and fantasy fans and more than worthy of its author's oeuvre." -- School Library Journal, starred review

“Pullman has created an intricate blend of science fiction and adventure, skillfully weaving together many disparate elements into a cohesive and exciting tale. Fordham's art, although realistic and spare, is cinematic in scope, imbuing this with all the momentum of a Hollywood blockbuster.” -- Kirkus Reviews