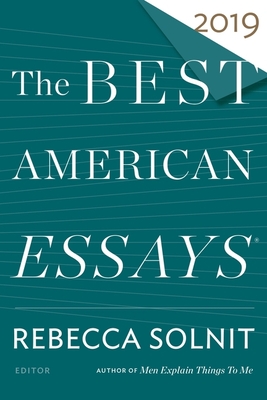 A collection of the year’s best essays selected by Robert Atwan and guest editor Rebecca Solnit.

“Essays are restless literature, trying to find out how things fit together, how we can think about two things at once, how the personal and the public can inform each other, how two overtly dissimilar things share a secret kinship,” contends Rebecca Solnit in her introduction. From lost languages and extinct species to life-affirming cosmologies and literary myths that offer cold comfort, the personal and the public collide in The Best American Essays 2019. This searching, necessary collection grapples with what has preoccupied us in the past year—sexual politics, race, violence, invasive technologies—and yet, in reading for the book, Solnit also found “how discovery can be a deep pleasure.”
The Best American Essays 2019 includes Michelle Alexander, Jabari Asim, Alexander Chee, Masha Gessen, Jean Guerrero, Elizabeth Kolbert, Terese Marie Mailhot, Jia Tolentino, and others.

Writer, historian, and activist REBECCA SOLNIT is the author of twenty books on feminism, western and indigenous history, popular power, social change and insurrection, wandering and walking, hope and disaster, including the books Men Explain Things to Me and Hope in the Dark; a trilogy of atlases of American cities; The Faraway Nearby; A Paradise Built in Hell: The Extraordinary Communities that Arise in Disaster; A Field Guide to Getting Lost; Wanderlust: A History of Walking; and River of Shadows, Eadweard Muybridge and the Technological Wild West (for which she received a Guggenheim, the National Book Critics Circle Award in criticism, and the Lannan Literary Award). A product of the California public education system from kindergarten to graduate school, she is a columnist at Harper’s and a regular contributor to the Guardian.

ROBERT ATWAN has been the series editor of The Best American Essays since its inception in 1986. He has edited numerous literary anthologies and written essays and reviews for periodicals nationwide.

"A worthwhile series installment that should not only interest contemporary readers but also hold a place in the historical record."--Library Journal