The Alloy of Law: A Mistborn Novel (The Mistborn Saga #4) (Paperback) 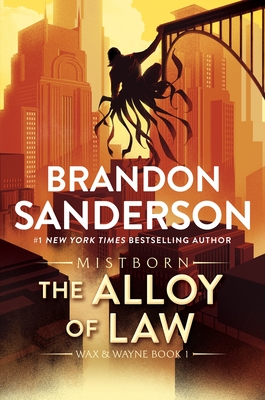 This is book number 4 in the The Mistborn Saga series.

Kelsier, Vin, Elend, Sazed, Spook, and the rest are now part of history—or religion. Yet even as science and technology are reaching new heights, the old magics of Allomancy and Feruchemy continue to play a role in this reborn world. Out in the frontier lands known as the Roughs, they are crucial tools for the brave men and women attempting to establish order and justice.

One such is Waxillium Ladrian, a rare Twinborn, who can Push on metals with his Allomancy and use Feruchemy to become lighter or heavier at will. After twenty years in the Roughs, Wax has been forced by family tragedy to return to the metropolis of Elendel. Now he must reluctantly put away his guns and assume the duties and dignity incumbent upon the head of a noble house. Or so he thinks, until he learns the hard way that the mansions and elegant tree-lined streets of the city can be even more dangerous than the dusty plains of the Roughs.

Mistborn: The Wax and Wayne series
Alloy of Law
Shadows of Self
Bands of Mourning
The Lost Metal

Brandon Sanderson grew up in Lincoln, Nebraska. He lives in Utah with his wife and children and teaches creative writing at Brigham Young University. His bestsellers have sold 30 million copies worldwide and include the Mistborn® Trilogy and its sequels; the Stormlight Archive novels; and other novels, including The Rithmatist, Steelheart, and Skyward. He won a Hugo Award for for The Emperor's Soul, a novella set in the world of his acclaimed first novel, Elantris. Additionally, he was chosen to complete Robert Jordan's Wheel of Time® sequence. For behind-the-scenes information on all his books, visit brandonsanderson.com.

Praise for the Mistborn series and Brandon Sanderson

Mistborn
“A breathtaking saga that promises twists every step of the way… succeeds in celebrating what makes fantasy magical while simultaneously delivering a fresh adventure that’s endlessly entertaining.” —Paste Magazine, “The 50 Best Fantasy Books of the 21st Century (So Far)”

Hero of Ages
“Sanderson is an evil genius. There is simply no other way to describe what he's managed to pull off in this transcendent final volume of his Mistborn trilogy.” —RT Book Reviews

“A fresh view of how a world can grow, building new dimensions into the best of the old. Sanderson continues to show that he is one of the best authors in the genre.” —Library Journal, starred review

“An engaging and fun romp of a read. The characters really shine in this book.”—RT Book Reviews

Shadows of Self
“Delivers more excitement, adventure, and magic in a newly industrialized world that is as richly realized as any of Sanderson’s creations.” —Buzzfeed

The Bands of Mourning
“Witty, memorable characters; a fast-moving, plate-spinning plot; and a deepening of one of the most creative magic systems ever conceived: it’s everything a Sanderson fan could ask for.” —B&N Sci-Fi and Fantasy Blog