Tears We Cannot Stop: A Sermon to White America (Paperback) 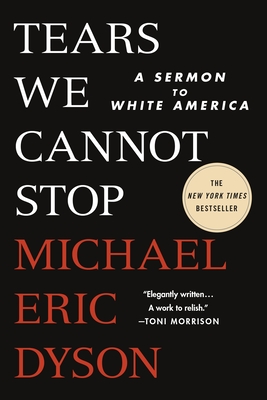 “Everybody who speaks after Michael Eric Dyson pales in comparison.” —Barack Obama

Published in the wake of the last presidential election, Tears We Cannot Stop spent two months on the New York Times bestseller list. Michael Eric Dyson argues that if we are to make real racial progress, we must face difficult truths, including being honest about how black grievance has been ignored, dismissed, or discounted. As Dyson writes, “The problem is you do not want to know anything different from what you think you know... You think we have been handed everything because we fought your selfish insistence that the world, all of it—all its resources, all its riches, all its bounty, all its grace—should be yours first and foremost, and if there’s anything left, why then we can have some, but only if we ask politely and behave gratefully.”


Short, emotional, literary, powerful, this modern classic is required reading for all Americans who care about the current and long-burning crisis in race relations.

MICHAEL ERIC DYSON is one of America’s premier public intellectuals and the author of many books, including the New York Times bestsellers JAY-Z, Tears We Cannot Stop, and What Truth Sounds Like. He holds the distinguished position of University Professor of Sociology at Georgetown University, is a contributing opinion writer for the New York Times and a contributing editor of The New Republic and ESPN’s The Undefeated.

"Anguish and hurt throb in every word of Michael Eric Dyson's Tears We Cannot Stop...It is eloquent, righteous, and inspired...Often lyrical, Tears is not...without indignation...brilliance and rectitude." —The Philadelphia Inquirer

"Dyson...creates a sermon unlike any we've heard or read, and it's right on time...an unapologetically bold plea for America to own up to its inexplicable identity anxiety." —Essence

"[Dyson's] narrative voice carries a deeper and more intimate authority, as it grows from his own experience as a black man in America — from being beaten by his father to being profiled by the police to dealing with his brother's long-term incarceration...Dyson's raw honesty and self-revelation enables him to confront his white audience and reach out to them." —The Chicago Tribune

"Be ready to pause nearly every other sentence, absorb what is said, and prepare for action. Tears We Cannot Stop is meant to change your thinking." —The Miami Times

"[Tears We Cannot Stop] talks directly to you, about issues deep, disturbing, and urgently in need of being faced." —Philly.com

“One of the most frank and searing discussions on race ... a deeply serious, urgent book, which should take its place in the tradition of Baldwin's The Fire Next Time and King's Why We Can't Wait. —The New York Times Book Review (Editor's Choice)

“Dyson lays bare our conscience, then offers redemption through our potential change.” —Booklist

"If you read Michael Eric Dyson’s New York Times op-ed piece "Death in Black and White," then you know what a powerful work of cultural analysis his book, Tears We Cannot Stop: A Sermon to White America is going to be. At a time when everyone needs to speak more openly, honestly, and critically about the racial divisions that have been allowed to grow in the United States, Dyson’s book — available in January — could not be a more welcome read." —Bustle

"A hard-hitting sermon on the racial divide... The readership Dyson addresses may not fully be convinced, but it can hardly remain unmoved." —Kirkus Reviews (Starred)

"Here’s a sermon that’s as fierce as it is lucid. It shook me up, but in a good way. This is how it works if you’re black in America, this is what happens, and this is how it feels. If you’re black, you’ll feel a spark of recognition in every paragraph. If you’re white, Dyson tells you what you need to know—what this white man needed to know, at least. This is a major achievement. I read it and said amen." —Stephen King

"The book that stirred all that in me and demanded to be reread as I watched and wondered what I can do to be a better ally is Tears We Cannot Stop." —Matt Olson, Orange County Register

"Michael Eric Dyson is alive to the fierce urgency of now and yet he's full of felicitous contradictions: an intellectual who won't talk down to anyone; a man of God who eschews piousness; a truth-teller who is not afraid of doubt or nuance; a fighter whose arguments, though always to the point, are never ad hominem. We can and should be thankful we have a writer like Michael Eric Dyson is our midst." —Dave Eggers, from the preface of Can You Hear Me Now?