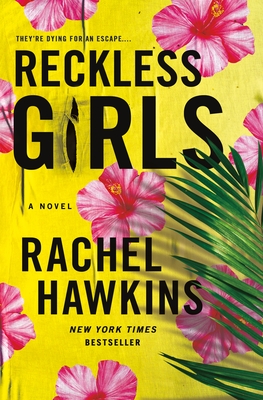 I always love Rachel Hawkins' narrative voice: funny, zesty, easy to get sucked into. This has a clever before/ now/ after structure to the plot and fascinating characters in a beautiful but unsettling setting.

“A tropical murder mystery perfect for mid-winter reading, this book is set on a sinister island in the Pacific, packed with Hawkins’ wonderfully gritty characters, and a murderer amongst them. I devoured this one.”
— Samantha Ladwig, Imprint Bookstore, Port Townsend, WA

Beautiful, wild, and strange—Meroe Island is a desolate spot in the middle of the Pacific Ocean with a mysterious history of shipwrecks, cannibalism, and even rumors of murder. It’s the perfect destination for the most adventurous traveler to escape everything... except the truth.

Six stunning twentysomethings are about to embark on a blissful, free-spirited journey—one filled with sun-drenched days and intoxicating nights. But as it becomes clear that the group is even more cut off from civilization than they initially thought, it starts to feel like the island itself is closing in, sending them on a dangerous spiral of discovery.

When one person goes missing and another turns up dead, the remaining friends wonder what dark currents lie beneath this impenetrable paradise—and who else will be swept under its secluded chaos. With its island gothic sensibility, sexy suspense, and spine-tingling reimagining of an Agatha Christie classic, Reckless Girls will wreck you.

Rachel Hawkins is the New York Times bestselling author of The Wife Upstairs and Reckless Girls, as well as multiple books for young readers. Her work has been translated in over a dozen countries. She studied gender and sexuality in Victorian literature at Auburn University and currently lives in Alabama.

Indie Next Pick and LibraryReads Pick

"It started as a romantic idyll. It ended with a stack of corpses. In "Reckless Girls," a vacation on a remote atoll in the South Pacific goes very, very wrong...the ending feels like that great moment in “Body Heat” when the camera swoops down to reveal the identity of the last person standing at the end of all the mayhem. Who will it be?" ––The New York Times

"A literary piña colada…Hawkins merges pitch-black comedy and wicked, gasp-inducing thrills, surprising at every turn as she uses the genre to comment on vengeance and femininity…Irresistible." ––Entertainment Weekly

"Hawkins twists revenge, madness, and an increasingly menacing setting into a cleverly plotted nightmare in paradise. A must-read for fans of Ruth Ware." ––Booklist (starred)

"Evocative prose and a palpably foreboding atmosphere complement Lux’s present-tense narration, which Hawkins studs with flashbacks exposing the secrets, lies, and betrayals that brought each character to this point. Danger and interpersonal drama abound, with a slew of outrageous twists adding to the fun. A soapy, claustrophobic page-turner." ––Kirkus

"With a gothic sense of foreboding and plenty of dark secrets...the plot builds to an explosive conclusion. Hawkins uses the tensions among her young, beautiful characters to take a look at the intersections of class and gender, but there are no innocent people in this treacherous paradise. Fans of the film The Beach and television's Lost will be enthralled." ––Shelf Awareness

"After reinventing Jane Eyre in The Wife Upstairs, Rachel Hawkins is giving Agatha Christie's And Then There Were None a modern twist in Reckless Girls." ––PopSugar

"This fun and exciting tale of suspense that happens to be both topical and tropical...Hawkins keeps the fun, engaging writing style of The Wife Upstairs, but gives readers a totally different experience with Reckless Girls—a darker tone with higher stakes, more tension, and much edgier characters." ––The Nerd Daily

"Like its seductive island setting, Rachel Hawkins’ sharp and feral Reckless Girls is a shimmering mirage of a novel that tantalizes from page one. Perfectly crafted and compulsively readable, each twist in this gripping tale of trust and survival is a gift just waiting to be unwrapped." ––Katherine St. John, author of The Lion's Den

"Sharp and taut with a slow burning tension that builds into an inferno, Reckless Girls takes the reader to remote Meroe Island. Beautiful, desolate, and sinister, six friends must grapple with secrets uncovered, guilt and grief, and a desperate fight to survive. Reckless Girls is a thriller worth staying up all night to finish." ––Julie Clark, New York Times and USA Today bestselling author of The Last Flight

"When six adventurous twenty-somethings set sail for a South Pacific Island in Rachel Hawkins’ un-put-downable new thriller, you might wish you were on board with them. That is, until the secrets they’ve packed expose themselves, the island turns menacing, and it suddenly becomes clear there’s a killer in paradise. Forget an early night. As the body count mounts in this fresh and riveting take on Agatha Christie’s And Then There Were None, you’ll tear breathlessly through the pages and won’t stop until you reach the stunning, jaw-dropping conclusion, one that makes you ask, 'Can anyone ever be trusted?'" ––Kate White, New York Times bestselling author of The Fiancée

Praise for The Wife Upstairs:

"A Southern Gothic twist on Jane Eyre that’s full of suspense, twists and turns...the story of this twisted love triangle will have you on the edge of your seat all the way until the end." ––CNN

"A delightfully surprising and suspenseful twist on Jane Eyre." ––Newsweek

"Consider us enthralled." ––The Skimm

"A delicious thriller that you'll likely want to read in a single sitting." ––TimeOut

"A thrilling, suspenseful tale of will-they-or-won't-they that will keep you on the edge." ––Woman’s Day

"Read to find out whether either of them can ever escape their secrets, or if their forbidden tryst is doomed to failure." ––Good Housekeeping