The Risen Empire: Book One of the Succession (Mass Market) 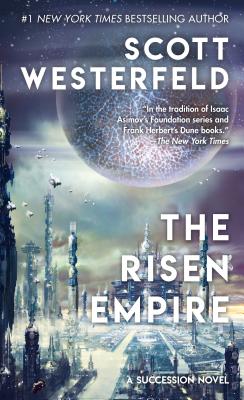 By Scott Westerfeld
Email or call for price.
Special Order - Not currently available to order

This is book number 1 in the Succession series.

From Scott Westerfeld, the acclaimed author of the Leviathan trilogy and the Uglies series comes a sweeping space opera, The Risen Empire, book one of the Succession duology.

Captain Laurent Zai and his pacifist lover Senator Nara Oxham, separated by lightyears, hold the fate of the empire in their hands. They serve an Emperor who has reigned with his sister the Child Empress for sixteen hundred years as living gods.

But even gods might bow to the fanaticism of the Rix, machine-augmented humans, who long for the cybernetic rule of a vast AI.

Only one immortal dynasty can prevail.

Scott Westerfeld is a software designer, a composer of music for modern dance, and the author of novels such as The Risen Empire and The Killing of Worlds. He lives in New York City and Sydney, Australia.

Praise for The Risen Empire

“Westerfeld's exceptionally smart and empathetic novel, the first of two in a series, confirms the buzz that space opera is one of the most exciting branches of current SF. . . . Keeping the reader constantly off-balance, Westerfeld skillfully integrates extreme technologies with human characters.”—Publishers Weekly (starred review)

“Proof that space opera can be as complex and sophisticated as any other form of literature. Doc Smith would barely recognize it.”—Mike Resnick

“In Westerfeld's hands, science fiction's cutting edge is wielded with both the precision of a surgeon's scalpel and the wild abandon of a machete.”—Wil McCarthy

“The Risen Empire glows with sense of wonder. I loved it.”—Ed Greenwood