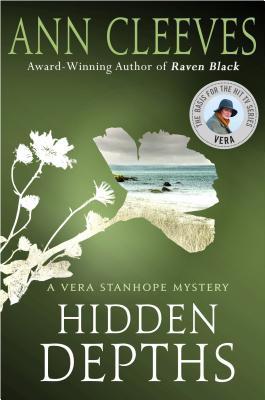 This is book number 3 in the Vera Stanhope series.

From Ann Cleeves—New York Times bestselling and award-winning author of the Vera and Shetland series, both of which are hit TV shows—comes Hidden Depths.

“Ann Cleeves is one of my favorite mystery writers.”—Louise Penny

On a hot summer on the Northumberland coast, Julie Armstrong arrives home from a night out to find her son murdered. Luke has been strangled, laid out in a bath of water and covered with wild flowers.

This stylized murder scene has Inspector Vera Stanhope and her team intrigued. But now, Vera must work quickly to find this killer who is making art out of death. As local residents are forced to share their private lives, sinister secrets are slowly unearthed.

And all the while the killer remains in their midst, waiting for an opportunity to prepare another beautiful, watery grave…

The first Shetland novel, Raven Black, won the CWA Gold Dagger for best crime novel, and Ann was awarded the CWA Diamond Dagger in 2017. She lives in the UK.

"Captivating...Readers will want to devour the entire series just for the pleasure of spending time in Vera's complex and inviting world."--Publishers Weekly

"Hidden Depths is a subtle, nuanced book, and Cleeves draws her characters with care and compassion. The landscape of rural Northumberland is vividly evoked and Inspector Stanhope--overweight, fallible, and driven by personal demons--is a terrific central character." --Tribune

"Hidden Depths is another classic, traditional crime novel in a contemporary setting by Ann Cleeves, winner of last year's Duncan Lawrie Dagger... The story follows each of the main characters in turn, but it is fat, lonely Vera, awkward with her staff and unaware that they are frightened of her, who makes the biggest impression in this skilfully crafted mystery"--Sunday Telegraph

"Cleeves sets a good scene, this time in Northumberland during a heatwave, and she brings a large cast to life, shifting points of view between bereaved relatives, victims, and suspects in a straightforward, satisfyingly traditional detective novel." --Jessica Mann, The Literary Review

"It's a dark, interesting novel with considerable emotional force behind it." --Andrew Taylor, The Spectator

“Nothing short of riveting." --Louise Penny