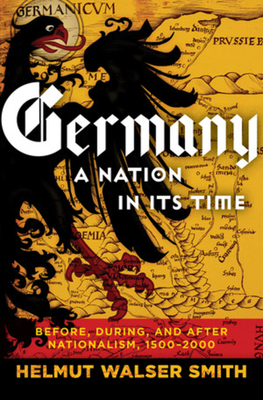 The first major history of Germany in a generation, a work that presents a five-hundred-year narrative that challenges our traditional perceptions of Germany’s conflicted past.

For nearly a century, historians have depicted Germany as a rabidly nationalist land, born in a sea of aggression. Not so, says Helmut Walser Smith, who, in this groundbreaking 500-year history—the first comprehensive volume to go well beyond World War II—challenges traditional perceptions of Germany’s conflicted past, revealing a nation far more thematically complicated than twentieth-century historians have imagined.

Smith’s dramatic narrative begins with the earliest glimmers of a nation in the 1500s, when visionary mapmakers and adventuresome travelers struggled to delineate and define this embryonic nation. Contrary to widespread perception, the people who first described Germany were pacific in temperament, and the pernicious ideology of German nationalism would only enter into the nation’s history centuries later. Tracing the significant tension between the idea of the nation and the ideology of its nationalism, Smith shows a nation constantly reinventing itself and explains how radical nationalism ultimately turned Germany into a genocidal nation.

Smith’s aim, then, is nothing less than to redefine our understanding of Germany: Is it essentially a bellicose nation that murdered over six million people? Or a pacific, twenty-first-century model of tolerant democracy? And was it inevitable that the land that produced Goethe and Schiller, Heinrich Heine and Käthe Kollwitz, would also carry out genocide on an unprecedented scale?

Combining poignant prose with an historian’s rigor, Smith recreates the national euphoria that accompanied the beginning of World War I, followed by the existential despair caused by Germany’s shattering defeat. This psychic devastation would simultaneously produce both the modernist glories of the Bauhaus and the meteoric rise of the Nazi party.

Nowhere is Smith’s mastery on greater display than in his chapter on the Holocaust, which looks at the killing not only through the tragedies of Western Europe but, significantly, also through the lens of the rural hamlets and ghettos of Poland and Eastern Europe, where more than 80% of all the Jews murdered originated. He thus broadens the extent of culpability well beyond the high echelons of Hitler’s circle all the way to the local level. Throughout its pages, Germany also examines the indispensable yet overlooked role played by German women throughout the nation’s history, highlighting great artists and revolutionaries, and the horrific, rarely acknowledged violence that war wrought on women.

Richly illustrated, with original maps created by the author, Germany: A Nation in Its Time is a sweeping account that does nothing less than redefine our understanding of Germany for the twenty-first century.

Helmut Walser Smith is the Martha Rivers Ingram Professor of History at Vanderbilt University, a recipient of the Guggenheim Fellowship, and the author of the acclaimed The Butcher’s Tale: Murder and Anti-Semitism in a German Town. He lives in Nashville, Tennessee.

There is much to like about this book. If this is an old story, it is told in a new way. Germany: A Nation in Its Time is elegantly written and distinguished by sharp insights. Anyone interested in how, during the 20th century, the history of Germany came to be so horrible will be stimulated and entertained, if periodically appalled.

This magisterial study addresses the central question in modern German history: How and why did the country embrace a racial and cultural nationalism that ultimately led to war and genocide? . . . . [A] sweeping history. . . . Smith describes its excesses—from the slaughter on the eastern front to the Holocaust—in moving detail.
— Andrew Moravcsik - Foreign Affairs

Drawing on cartography, literature, travel narratives, and the history of politics, warfare, science, religion, and art, Helmut Walser Smith constructs a magisterial account of the German nation as a history of constant transformation and reinvention. Beautifully written and richly textured, it is essential reading for everyone interested in Germany's past, present, and future.
— Sir Christopher Clark, University of Cambridge

Germany went from genocidal madness to a model democracy, dedicated to centrism and even pacifism, in a remarkably short space of historical time. Helmut Walser Smith painstakingly documents how all of this has happened, and why. It is hard to imagine a more analytically distilled version of German history. As Germany now begins a generational change in leadership, this book will serve as a guidepost.
— Robert D. Kaplan, author of In Europe's Shadow: Two Cold Wars and a Thirty-Year Journey Through Romania and Beyond

Helmut Walser Smith's Germany is an encompassing history of German efforts to define their nation in all its stunning contradictions through five centuries — pastoral, productive, exalted, for a time murderous, for longer civic, always complex.

In these profound meditations on Germany’s history, Helmut Walser Smith explores the changing meaning of the nation from its first emergence in the sixteenth century to its transformation in the contemporary world. Full of new insights and provocative conclusions, Germany: A Nation in Its Time challenges our assumptions about Germany’s past. This is a national history for a post-national age.

Helmut Walser Smith’s brilliant new book does nothing less than rewrite five centuries of German history.... Germany: A Nation in Its Time is a stunningly successful example of an interpretive and argumentative history.