Whose Names Are Unknown (Paperback) 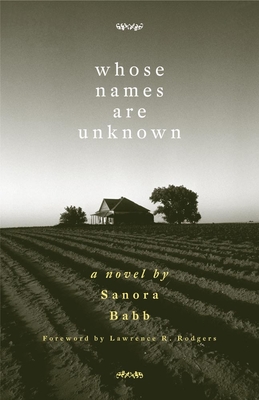 Babb is the one of the greatest American writers you've never heard of, and her novel, Whose Names Are Unknown, is (until recently) an unsung masterpiece. Babb turned in this manuscript to her publisher at the same time John Steinbeck's Grapes of Wrath hit the shelves, and as a result, it went unpublished until 2004, the year before her death. Set during the dust bowl of the 30's, her characters head west to California and encounter brutal hardship. The warmth and heart with which Babb treats her characters is telling; this is a necessary, empathetic book, especially considering the plight of our city's own unhoused population.

Sanora Babb's long-hidden novel Whose Names Are Unknown tells an intimate story of the High Plains farmers who fled drought dust storms during the Great Depression. Written with empathy for the farmers' plight, this powerful narrative is based upon the author's firsthand experience. This clear-eyed and unsentimental story centers on the fictional Dunne family as they struggle to survive and endure while never losing faith in themselves. In the Oklahoma Panhandle, Milt, Julia, their two little girls, and Milt's father, Konkie, share a life of cramped circumstances in a one-room dugout with never enough to eat. Yet buried in the drudgery of their everyday life are aspirations, failed dreams, and fleeting moments of hope. The land is their dream. The Dunne family and the farmers around them fight desperately for the land they love, but the droughts of the thirties force them to abandon their fields. When they join the exodus to the irrigated valleys of California, they discover not the promised land, but an abusive labor system arrayed against destitute immigrants. The system labels all farmers like them as worthless "Okies" and earmarks them for beatings and worse when hardworking men and women, such as Milt and Julia, object to wages so low they can't possibly feed their children. The informal communal relations these dryland farmers knew on the High Plains gradually coalesce into a shared determination to resist. Realizing that a unified community is their best hope for survival, the Dunnes join with their fellow workers and begin the struggle to improve migrant working conditions through democratic organization and collective protest. Babb wrote Whose Names are Unknown in the 1930s while working with refugee farmers in the Farm Security Administration (FSA) camps of California. Originally from the Oklahoma Panhandle are herself, Babb, who had first come to Los Angeles in 1929 as a journalist, joined FSA camp administrator Tom Collins in 1938 to help the uprooted farmers. As Lawrence R. Rodgers notes in his foreword, Babb submitted the manuscript for this book to Random House for consideration in 1939. Editor Bennett Cerf planned to publish this "exceptionally fine" novel but when John Steinbeck's The Grapes of Wrath swept the nation, Cerf explained that the market could not support two books on the subject. Babb has since shared her manuscript with interested scholars who have deemed it a classic in its own right. In an era when the country was deeply divided on social legislation issues and millions drifted unemployed and homeless, Babb recorded the stories of the people she greatly respected, those "whose names are unknown." In doing so, she returned to them their identities and dignity, and put a human face on economic disaster and social distress.