What Does the Constitution Say?: A Kid's Guide to How Our Democracy Works (Paperback) 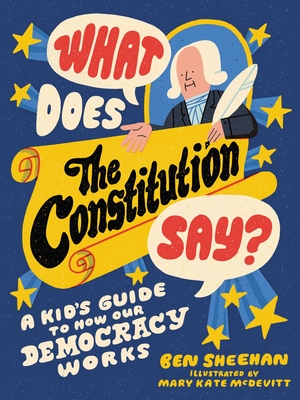 If you've never read the Constitution, let this guidebook help you! Featuring fun facts, cool illustrations, and even hilarious jokes, What Does the Constitution Say? will help you understand how our American government really works.

Written more than 230 years ago, the Constitution can be hard to understand (even for adults). But it also gives you what you need to make our country the best it can be for everyone. What Does the Constitution Say? takes you on a tour of the whole Constitution while explaining what its fancy words really mean. From the Preamble to the 7 Articles to the 27 Amendments (so far), this fun-to-read guide is packed with bite-sized info, historic quotes, and graphics on important topics such as:

Ben Sheehan’s civic education work has been featured by Good Morning America, the New York Times, and the National Archives. A former award-winning producer at Funny Or Die, he is one of The Hollywood Reporter’s “NextGen: 35 Under 35” and also co-created Gerrymander Jewelry, a finalist for Fast Company’s World Changing Ideas. He holds a B.A. with High Honors in Political Science and American Studies from Emory University.