The Ballad of Perilous Graves (Paperback) 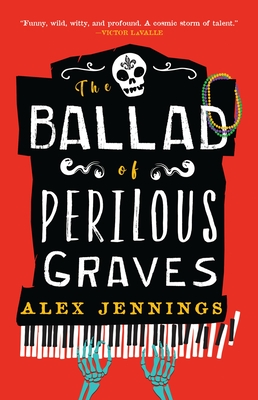 "A wild and wonderful debut, teeming with music, family and art."—New York Times

A fun and fantastical love letter to New Orleans unfolds when a battle for the city's soul brews between two young mages, a vengeful wraith, and one powerful song in this wildly imaginative debut.

Nola is a city full of wonders. A place of sky trolleys and dead cabs, where haints dance the night away and Wise Women help keep the order. To those from Away, Nola might seem strange. To Perilous Graves, it’s simply home.

Perry knows Nola’s rhythm as intimately as his own heartbeat. So when the city’s Great Magician starts appearing in odd places and essential songs are forgotten, Perry knows trouble is afoot.

Nine songs of power have escaped from the piano that maintains the city’s beat, and without them, Nola will fail. Unwilling to watch his home be destroyed, Perry will sacrifice everything to save it. But a storm is brewing, and the Haint of All Haints is awake. Nola’s time might be coming to an end.

Alex Jennings is a teacher, author, and performer living in New Orleans. His writing has appeared in strangehorizons.com, podcastle, The Peauxdunque Review, Obsidian Lit, the Locus Award-winning Luminescent Threads: Connections to Octavia Butler, and in numerous anthologies.

His debut collection, Here I Come and Other Stories was released in 2012. He also serves as MC and co-producer of Dogfish, a monthly literary readings series. He is a graduate of Clarion West (2003) and the University of New Orleans. He was born in Wiesbaden (Germany) and raised in Gaborone (Botswana), Paramaribo (Surinam), and Tunis (Tunisia) as well as the United States. He is an afternoon person.

"A hallucinatory wonder of a debut with hints of dark humor and the intellectual challenge of Samuel Delaney. Brimming with language and music, this phantasmagoric novel taps the deep root of multi-cultural, multi-racial life in, and beyond, New Orleans. It’s an electrifying trip with zombie cabbies, sentient blues songs, parading graffiti tags, and the child mages Perilous “Perry” Graves, his sister Brendy and their best friend Peaches who must outwit, outstomp, and outplay to save NOLA’s, their city’s, our city’s, soul."—Walter Mosley, New York Times bestselling author

“Alex Jennings did not come here to play. He came to swing, stride, and make prose sing. This novel is funny, wild, witty, and profound. The Ballad of Perilous Graves is the debut of a cosmic storm of talent.” —Victor LaValle, author of The Changeling

“The Ballad of Perilous Graves takes readers on a glorious, gorgeously sinister, and phantasmagorical journey through New Orleans, in the company of an unforgettable hero and a cast of magical characters so real I ached to live in their world.  A stunning debut that is sure to become a classic."—Elizabeth Hand, author of Generation Loss and Hokuloa Road

"A wild and wonderful debut, teeming with music, family and art...This book is gorgeously written, with prose I wanted to eat off the page...The effervescent invention of Jennings’s work is dazzling." —New York Times

"Stunning... Jennings develops a rich, enveloping world brimming with mesmerizing art, music, and fantasy, and sets within it a rich discussion of community and culture. The unmistakable love for New Orleans that emanates from these pages will stick in readers’ heads—and hearts—like the catchiest of tunes."—Publishers Weekly (starred review)

"A spectacularly original re-imagining of the myths and legends of New Orleans brought vividly to life through Jennings' wondrous prose. The Ballad of Perilous Graves is not only an engrossing adventure but a potent homage to the beating heart of one of the world's most magical cities." —Ladee Hubbard, author of The Talented Ribkins

"Alex Jennings has composed a beautiful song full of magic and rhythm, darkness and delight. A profoundly gorgeous debut." —Christina Henry, author of Near the Bone and Horseman

"The Ballad of Perilous Graves has got to be one of the most amazing books I’ve read in a minute. Magical, lyrical, gritty, otherworldly…sh*t is hype like Bayou Classic in the 90s."—P. Djèlí Clark, author of The Master of Djinn

"Jennings weaves a brilliant tapestry... With wonderful imagery—living graffiti and personified songs and zombie nutria—and an emphasis on the importance of family, history, and music, The Ballad of Perilous Graves is a remarkable debut."—Booklist (starred review)

"Full to bursting with surreal ideas, gloriously unique characters, unapologetic Blackness, and a soul-deep love for New Orleans and its people."—Vulture, "The Best Fantasy Novels of 2022"

"An enchanting, energetic, wild ride of a story set to a staccato melody. The electric prose leaps off the page in a riot of colors and sounds. An astounding debut that will leave readers hungry for more.”—Leslye Penelope, author of The Monsters We Defy

"Brimming with heart and imagination, The Ballad of Perilous Graves is a wild, dark and joyful love song to New Orleans, the power of stories, and hope in the face of destruction. A spectacular debut."—H. G. Parry, author of The Magician's Daughter

"Like any good trip through New Orleans, The Ballad of Perilous Graves is both magical and musical, the result is a book you both see and hear. In other words, both an unforgettable story and an experience." —Rion Amilcar Scott, author of The World Doesn't Require You: Stories

"Vital and appealing, vibrant and propulsive. Alex Jennings weaves together three of my favorite things — music, New Orleans, and magic. The Ballad of Perilous Graves is exactly what I wanted to read."—Kelly Link

"Jennings takes the reader on an intimate tour of New Orleans and her mirror-twin, the equally seductive and even stranger city of Nola. Jennings has an unsurpassed ear for New Orleans dialogue, and his tale is scary, sweet, lyrical, and real."—Poppy Z. Brite

"I enjoyed The Ballad of Perilous Graves tremendously. Jennings writes with an energy and a profusion of imagination and vividness that carries you off to a secret New Orleans where music is magic. Brilliant!”—Katherine Addison, author of The Goblin Emperor

"This ballad is a true picaresque, an adventure story…It’s an epic quest, a fantasy on a grand scale. It’s a big book in every way—length, vision, and most of all, heart."
—Times-Picayune/New Orleans Advocate

"Jennings has crafted a world that is warm, strange, loud and colorful, and brimming with magic and heart — this is New Orleans as you’ve never seen before."
—Apartment Therapy

"Jennings’ novel is a love letter to the real-life New Orleans, the power of music, and the bonds of community that hold us all together."
—Paste

"The two worlds of this gripping and inventive fantasy are so vividly depicted that reading it is a bit like taking a fabulous city break."—The Guardian

"A literary and music-filled adventure...The Ballad of Perilous Graves is a must read."

“In Alex Jennings’ spectacular debut, the city of New Orleans is transformed into a magical city where musical creatures and spirits, mages, and more flourish within the city’s limits.”—Lightspeed Magazine

"New Orleans comes to magical, undead, vibrant life in the pages of this book, which is charged with a cadence that is entirely unique. The line writing of this book is so fantastic, switching in between the perspectives of a young teacher and three child-mages...An incredible, evocative, syrupy book that will not fail to enchant you."—io9