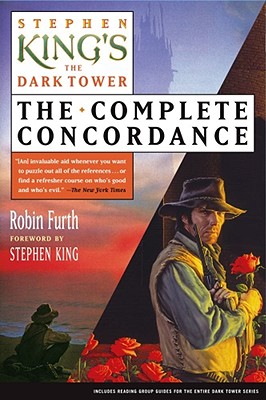 By Robin Furth, Stephen King (Introduction by)
Email or call for price.
Hard to Find - Not currently available to order

The complete concordance for Stephen King's bestselling epic Dark Tower series—soon to be a major film.

The Dark Tower is the backbone of Stephen King's legendary career. Begun more than thirty years ago, seven books and more than three thousand pages make up this bestselling, epic fantasy series. Previously published in two separate volumes, The Complete Concordance is the definitive encyclopedic reference book that provides readers with everything they need to navigate their way through the series. With hundreds of characters, Mid-World geography, High Speech lexicon, and extensive cross-references, this comprehensive handbook is essential for any Dark Tower fan.

Mid-World and Our World Places

Mid-, End-, and Our World Maps

Timeline for the Dark Tower Series

References to Stephen King's Other Work

Robin Furth is perhaps the only person around who knows more about the Dark Tower mythos than Stephen King himself, and is the author of The Dark Tower: The Complete Concordance.

Stephen King is the author of more than sixty books, all of them worldwide bestsellers. His recent work includes The Institute, Elevation, The Outsider, Sleeping Beauties (cowritten with his son Owen King), and the Bill Hodges trilogy: End of Watch, Finders Keepers, and Mr. Mercedes (an Edgar Award winner for Best Novel and an AT&T Audience Network original television series). His novel 11/22/63 was named a top ten book of 2011 by The New York Times Book Review and won the Los Angeles Times Book Prize for Mystery/Thriller. His epic works The Dark Tower and It are the basis for major motion pictures, with It now the highest grossing horror film of all time. He is the recipient of the 2018 PEN America Literary Service Award, the 2014 National Medal of Arts, and the 2003 National Book Foundation Medal for Distinguished Contribution to American Letters. He lives in Bangor, Maine, with his wife, novelist Tabitha King.

"[An] invaluable aid whenever you want to puzzle out all of the references . . . or find a refresher course on who's good and who's evil." -- The New York Times

"I found this overview of In-World, Mid-World, and End-World both entertaining and invaluable. So, I am convinced, will you." -- From the foreword by Stephen King

"Furth's concordance anticipates -- and answers -- virtually every question the Constant Reader might come up with." -- Locus