Stephen King's the Dark Tower: A Concordance, Volume I (Paperback) 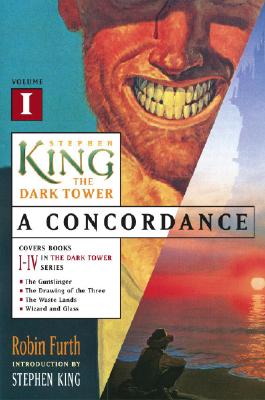 By Robin Furth, Stephen King (Introduction by)
Email or call for price.
Special Order - Not currently available to order

"I found this overview of In-World, Mid-World, and End-World both entertaining and invaluable. So, I am convinced, will you." -- from the foreword by Stephen King

The Dark Tower is the backbone of Stephen King's legendary career. Inspired more than thirty years ago by works as diverse as J. R. R. Tolkien's epics, Robert Browning's poetry, and Sergio Leone's Westerns, this is the tale that Stephen King has never abandoned. When he typed the first sentence in 1970, King feared the telling might take several lifetimes, but two thousand pages and four books later, the end is in sight.

Published in anticipation of "The Dark Tower V: Wolves of the Calla, A Concordance, Volume I" is the definitive guide to the first four books in Stephen King's bestselling epic fantasy series, The Dark Tower. With the hundreds of characters, Mid-World geography, and the High Speech lexicon, this comprehensive handbook is one no Dark Tower fan will want to be without. It is the perfect way in for readers new to the series, or the perfect way back in for longtime fans who read the first four books years ago.

Mid-World and Our World Places

Roland Deschain and His "Ka-tet"

The Dark Tower and the Quest