Symphony for the City of the Dead: Dmitri Shostakovich and the Siege of Leningrad (Prebound) 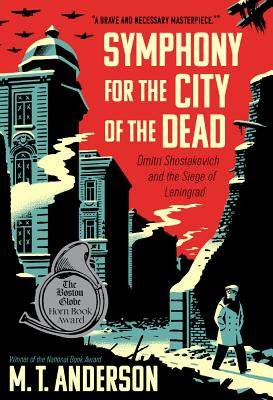 By M. T. Anderson
Email or call for price.
Out of Print- Not currently available to order

A 2016 YALSA Award for Excellence in Nonfiction for Young Adults Finalist
National Book Award winner M. T. Anderson delivers a brilliant and riveting account of the Siege of Leningrad and the role played by Russian composer Shostakovich and his Leningrad Symphony.
In September 1941, Adolf Hitler's Wehrmacht surrounded Leningrad in what was to become one of the longest and most destructive sieges in Western history almost three years of bombardment and starvation that culminated in the harsh winter of 1943 1944. More than a million citizens perished. Survivors recall corpses littering the frozen streets, their relatives having neither the means nor the strength to bury them. Residents burned books, furniture, and floorboards to keep warm; they ate family pets and eventually one another to stay alive. Trapped between the Nazi invading force and the Soviet government itself was composer Dmitri Shostakovich, who would write a symphony that roused, rallied, eulogized, and commemorated his fellow citizens the "Leningrad" Symphony, which came to occupy a surprising place of prominence in the eventual Allied victory.
This is the true story of a city under siege: the triumph of bravery and defiance in the face of terrifying odds. It is also a look at the power and layered meaning of music in beleaguered lives. "Symphony for the City of the Dead "is a masterwork thrillingly told and impeccably researched by National Book Award winning author M. T. Anderson.

M. T. Anderson is the author of "Feed, "winner of the "Los Angeles Times "Book Prize, as well as "The Astonishing Life of Octavian Nothing, Traitor to the Nation Volume I: The Pox Party, "winner of the National Book Award and a "New York Times "bestseller, and its sequel, "The Kingdom on the Waves, "which was also a "New York Times "bestseller. Both volumes were also named Michael L. Printz Honor Books. M. T. Anderson lives in Cambridge, Massachusetts.