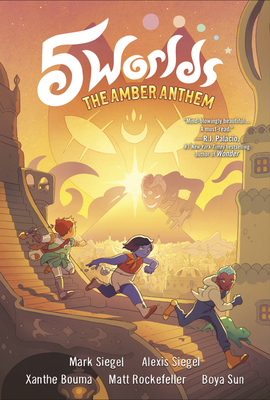 Think Star Wars meets Avatar: The Last Airbender! Kazu Kibuishi (AMULET) says this graphic novel adventure is "a magical journey, as fun as it is beautiful!"

In book 4, Oona Lee arrives on Salassandra determined to light the yellow beacon and continue her quest to save the Five Worlds from the evil Mimic's influence. But the beacon is encased in amber! An ancient clue says that Oona and her friends must seek out the Amber Anthem to succeed. Meanwhile, Stan Moon sends an evil Jax robot to assassinate Oona and hunts down An Tzu himself. Turns out, as An Tzu fades away from his Vanishing Illness, he's becoming someone else--someone who could tip the scales in the battle for the Five Worlds!

MARK SIEGEL has written and illustrated several award-winning and bestselling picture books and graphic novels. He is also the founder and editorial director of First Second Books. He lives with his family in New York. Find Mark at marksiegelbooks.com and the 5 Worlds team on Twitter at @5WorldsTeam.

ALEXIS SIEGEL is a writer and translator who has translated a number of bestselling graphic novels, including Joann Sfar's The Rabbi's Cat and Pénélope Bagieu's Exquisite Corpse into English and Gene Luen Yang's American Born Chinese into French.

XANTHE BOUMA is an illustrator based in Los Angeles. Her work includes picture books, such as Little Sid, fashion illustration, and comics. Follow Xanthe on Tumblr at @yumbles and on Twitter at @xoxobouma.

MATT ROCKEFELLER is an illustrator and comic artist from Tucson, Arizona. Currently living in Portland, Oregon. His work includes book covers, animation, and picture books such as Train, Rocket, and Pop! Follow him on Tumblr at @mrockefeller and on Twitter at @mcrockefeller.

BOYA SUN is an illustrator and coauthor of the graphic novel Chasma Knights. Originally from China, Boya now lives in Los Angeles. Follow Boya on Tumblr at @boyasun and on Twitter at @boyaboyasun.