Quitter: A Memoir of Drinking, Relapse, and Recovery (Hardcover) 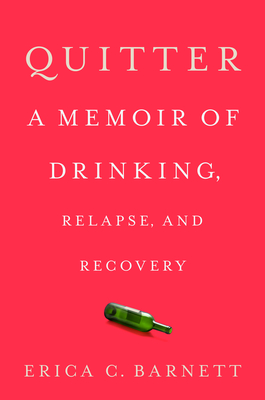 "Emotionally devastating and self-aware, this cautionary tale about substance abuse is a worthy heir to Cat Marnell's How to Murder Your Life." --Publishers Weekly (starred review)

A startlingly frank memoir of one woman's struggles with alcoholism and recovery, with essential new insights into addiction and treatment

Erica C. Barnett had her first sip of alcohol when she was thirteen, and she quickly developed a taste for drinking to oblivion with her friends. In her late twenties, her addiction became inescapable. Volatile relationships, blackouts, and unsuccessful stints in detox defined her life, with the vodka bottles she hid throughout her apartment and offices acting as both her tormentors and closest friends.

By the time she was in her late thirties, Erica Barnett had run the gauntlet of alcoholism. She had recovered and relapsed time and again, but after each new program or detox center would find herself far from rehabilitated. "Rock bottom," Barnett writes, "is a lie." It is always possible, she learned, to go lower than your lowest point. She found that the terms other alcoholics used to describe the trajectory of their addiction--"rock bottom" and "moment of clarity"--and the mottos touted by Alcoholics Anonymous, such as "let go and let God" and "you're only as sick as your secrets"--didn't correspond to her experience and could actually be detrimental.

With remarkably brave and vulnerable writing, Barnett expands on her personal story to confront the dire state of addiction in America, the rise of alcoholism in American women in the last century, and the lack of rehabilitation options available to addicts. At a time when opioid addiction is a national epidemic and one in twelve Americans suffers from alcohol abuse disorder, Quitter is essential reading for our age and an ultimately hopeful story of Barnett's own hard-fought path to sobriety.

Erica C. Barnett is an award-winning political reporter. She started her career at The Texas Observer and went on to work as a reporter and news editor for the Austin Chronicle, Seattle Weekly, and The Stranger. She now covers addiction, housing, poverty, and drug policy at her blog, The C Is for Crank. She has written for a variety of local and national publications, including The Huffington Post, Seattle Magazine, and Grist.

"Barnett’s prose style is brassy and cleareyed, with echoes of Anne Lamott. . . . Barnett’s pluck will appeal to avid memoir readers, who will cheer her hard-won recovery, especially the steadfastness of her best friend, Josh. For those new to recovery and the people who love them, Barnett’s story could be a balm. Quitter is both a warning and a reminder: If you can stop drinking after one or two beers, you’re not better than Barnett and the more than 60 million Americans who binge drink. You’re just luckier."
—Beth Macy, The New York Times Book Review

"[A] powerful recovery memoir, in part because Barnett uses her investigative reporting skills to examine how detox centers and treatment rehabs operate."
—The Seattle Times

"Barnett is . . . candid about her failings, unsparing in the details . . .  regarding addiction to alcohol. It can overtake a person's life, debase a person, drag a person into depths of disgraceful behavior; I'm living proof, she tells us."
—The Austin Chronicle

"As addiction has become more of a national conversation, thanks in part to bestselling books like Leslie Jamison’s The Recovering: Intoxication and Its Aftermath, women authors have been at the forefront. . . . Erica C. Barnett’s memoir continues this important work. . . . By the time Barnett was in her late 30s, she’s recovered and relapsed countless times, giving her a unique and eye-opening perspective about the language we use to discuss addiction ('Rock bottom is a lie,' she writes) and how few resources are available to people with addictions who continue to relapse."
—Bitch Media’s "17 Books Feminists Should Read in July"

"Journalist Barnett debuts with an intense account of her alcoholism, denial, and, ultimately, redemption. . . . Barnett’s snappy prose carries the reader through several rounds of rehab before the final one sticks, pulling no punches as she goes. Barnett doesn’t skimp on her life’s lows (she goes to an interview drunk, and shoplifts wine) of how her ever-worsening problem caused her to lose her health, her job, and many of her friends, and alienate her family. . . . Emotionally devastating and self-aware, this cautionary tale about substance abuse is a worthy heir to Cat Marnell’s How to Murder Your Life."
—Publishers Weekly (starred review)

"A Seattle-based political reporter recounts her tumultuous, nearly deadly dance with the bottle. . . . Barnett rises to the challenge with a witty, self-deprecating, sometimes snide voice. . . . If you’re in the mood for a well-written, relatable, rock-bottom recovery memoir, this will hit the spot.”
—Kirkus Reviews

“I can’t think of another memoir that captures the nightmare of drinking relapse like this one. Erica Barnett’s tale is brutal, maddening, and beautiful. Quitter will give hope to anyone afraid they can't ever get this thing. Hang in there. You just might.”
—Sarah Hepola, New York Times bestselling author of Blackout

“[Barnett] paints a grotesque portrait of the horror show that is alcoholism with great skill and style. I tore through this book.”
—Cat Marnell, New York Times bestselling author of How to Murder Your Life

“Quitter is all these things: a beautifully told story of one woman's descent into darkness; a rigorously researched exploration of the causes and treatments of alcohol abuse; a furious howl of pain. Erica C. Barnett has written a female story of addiction that moves beyond clichés and accepted truths. I loved this book, in all its raging glory.”
—Claire Dederer, author of Love and Trouble

“Barnett writes with seismic clarity on the baffling nature of the early morning vodka trip and the anguish and relief it produces in equal measure. This book understands what it is like to fail but have that last bit of hope. Remarkable writing on a disease that effects so many. Quitter is the new manual for those seeking a recovered life.”
—Erin Lee Carr, author of All That You Leave Behind; director of I Love You, Now Die and At the Heart of Gold

“Erica Barnett’s Quitter is a harrowing, deeply truthful account of her long journey through alcoholism and repeated relapse—an addiction consequence so common that Barnett calls it ‘almost inevitable,’ yet one to which most treatment methodologies pay scant attention. Barnett doesn’t flinch in showing the impact of her ever-worsening relapses on her health, career, and even her most steadfast relationships, and she holds herself to account while also making it clear how the treatment system failed her. In addition to being a riveting, suspenseful read, Quitter will also start important conversations about how addicts can best be helped at all stages of the recovery cycle. An essential addition to literature of addiction.”
—Kristi Coulter, author of Nothing Good Can Come From This

“Erica Barnett’s Quitter is an impeccably researched, long-overdue examination of America’s billion-dollar addiction industry and its decidedly mixed record of success. Drawing from her own painful experience in countless hospitals, rehabs and treatment centers, Barnett bravely tackles the limitations and sacred cows of the 12-step-movement while also acknowledging the vital role it has played in rescuing thousands of addicts and alcoholics from desperate cycles of despair. In her hard-won quest for sobriety she discovers that it’s possible for even the most hopeless addicts to recover if they are willing to give up pre-conceived notions about what recovery looks like and how to get there.”
—Maer Roshan, author of Courtney Comes Clean