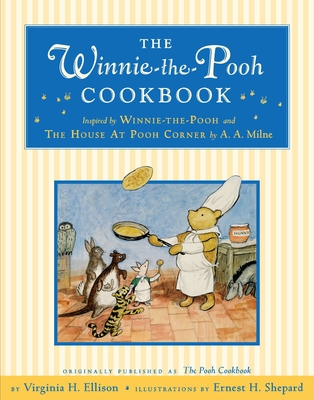 The famously rotund bear is happiest when in possession of a brimming pot of honey, but when it comes time for meals and smackerels, the residents of the Hundred Acre Wood need something a little more substantial. This delightful collection contains over fifty tried-and-true recipes for readers of all ages to make and enjoy, starting with Poohanpiglet pancakes and ending with a recipe for getting thin-with honey sauces, holiday treats, and dishes for every mealtime in between.

Forty years after its original publication, this updated and beautifully redesigned cookbook features quotes from the original books and Ernest H. Shepard's beloved drawings, which leap off the pages in full color.

Ernest H. Shepard was born in 1879 in London. His father was an architect and his mother whodied when he was ten years old was the daughter of a notable watercolorist. It was she who firstencouraged young Ernest to paint and draw. Art became Ernest's passion, and after attendingHeatherly's Art School and the Royal Acadamy Schools, Shepard supported himself by drawingfor the illustrated papers and by illustrating books.

When World War I broke out, Shepard served in France, Belgium, and Italy, attaining the rank ofMajor. On his return to England, he continued with his art. He became a regular contributor toPunch, the classic British humor magazine, where he met A. A. Milne, a man who was to beinstrumental to his career. Shepard was elected to the editorial board of Punch, and shortlythereafter, he agreed to do the illustrations for Milne's first book of verse, When We Were VeryYoung.

The illustrations that Shepard created for all four of the Pooh books received worldwide acclaim.For the next thirty years, he continued to illustrate books for both adults and children. In 1973,for the first time, he added color to his drawings for Winnie-the-Pooh. Shepard ultimately donatedseveral hundred drawings to the Victoria and Albert Museum in London.
Ernest H. Shepard continued to pursue his love of drawing until his death in1976.copyright ? 2000 by Penguin Putnam Books for Young Readers. All rights reserved.