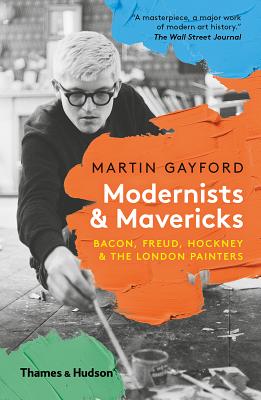 By Martin Gayford
$16.95
Email or call for price

“If you are interested in modern British art, the book is unputdownable. If you are not, read it. You soon will be.” —Financial Times

Modernists and Mavericks explores the development of painting in London from the Second World War to the 1970s based on an exceptionally deep well of firsthand interviews, with artists such as Victor Pasmore, John Craxton, Lucian Freud, Frank Auerbach, Allen Jones, R. B. Kitaj, Euan Uglow, Howard Hodgkin, Terry Frost, Gillian Ayres, Bridget Riley, David Hockney, Frank Bowling, Leon Kossoff, John Hoyland, and Patrick Caulfield. Gayford also teases out the thread weaving these individual lives together and demonstrates how and why, long after it was officially declared dead, painting lived and thrived in London. Simultaneously aware of the influences of Jackson Pollock, Alberto Giacometti, and the traditions of Western art, from Piero della Francesca to Pablo Picasso and Henri Matisse, the postwar painters were bound together by their confidence that this ancient medium could do fresh and marvelous things, and their urge to explore, in their diverse ways, the possibilities of paint.

Martin Gayford is an art critic for The Spectator. His books include Modernists & Mavericks, Man with a Blue Scarf, A Bigger Message, Rendez-vous with Art (with Philippe de Montebello), A History of Pictures (with David Hockney), and most recently, The Pursuit of Art.