Nothing but the Truth (Dismas Hardy #6) (Paperback) 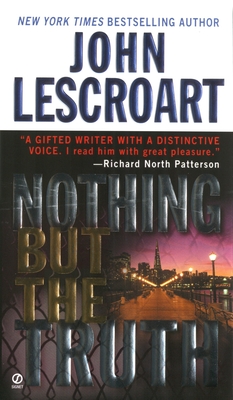 By John Lescroart
$9.99
Email or call for price

This is book number 6 in the Dismas Hardy series.

From the acclaimed New York Times bestselling author of Guilt and The 13th Juror comes an electrifying new thriller--a novel in which San Francisco defense attorney Dismas Hardy faces the case of his career. This time his family is involved--and for Hardy, a devoted husband and father, the stakes have never been higher.

Dismas knows his wife, Frannie, is the most reliable of mothers. When she fails to pick up their children from school one afternoon, he's convinced something terrible has happened. It has: Frannie Hardy is in jail. Called before the grand jury in a murder investigation, she refused to reveal a secret entrusted to her by a man whose children attend the same school as hers, a friend who is accused of killing his wife. But now he has disappeared. Hardy knows there's only one way to get Frannie out of jail: clear her friend of murder. That is, if he can be found.

As he moves through a labyrinthine world of big business and San Francisco politics, looking for a man he half hopes never to find, a furious and frustrated Hardy is struggling to understand why his impeccably faithful wife is being so loyal to another man. What kind of truth could keep a wife from her husband, a mother from her children--could hold Hardy so powerless before the wrath of the law?

With an unparalleled ability to illuminate the complexities of relationships while weaving a story of breathtaking suspense, Lescroart has never been in finer form. And Nothing But the Truth is his finest hour.

John Lescroart is the New York Times bestselling author of numerous legal thrillers and mysteries, most of them set in contemporary San Francisco. Among his novels are The Fall, The Keeper, The Ophelia Cut, The Hunt Club, The Second Chair, The First Law, Nothing but the Truth, and Dead Irish, as well as two novels featuring Auguste Lupa, the reputed son of Sherlock Holmes.

"The novel's pacing is reminiscent of classic Ross Macdonald, where a week's worth of events are condensed into a few hours . . . [a] winning thriller."—Publishers Weekly (starred review)

“Dismas Hardy is such a likable main character that his very presence keeps the story grounded…very entertaining.” —Chicago Tribune