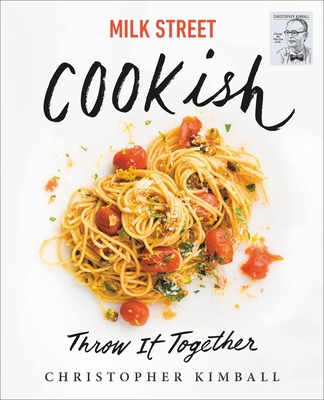 By Christopher Kimball
$35.00
Available - On our shelves now

I am a sucker for simple recipes that deliver flavor and satisfaction, so this cookbook is a winner for me! The enticing photos and six-ingredient recipes encourage spontaneity and creativity in the kitchen. If you need a low-stress way to spice up your homemade meals, try this. For omnivores, but some of the recipes are vegetarian and others can be adapted.

Throw together fast, flavorful meals in no time with just a handful of ingredients with 200 highly cookable, delicious, and incredibly simple recipes from the James Beard Award-winning team at Milk Street.

In Cookish, Christopher Kimball and his team of cooks and editors harness the most powerful cooking principles from around the world to create 200 of the simplest, most delicious recipes ever created. These recipes, most with six or fewer ingredients (other than oil, salt, and pepper), make it easy to be a great cook -- the kind who can walk into a kitchen and throw together dinner in no time.

In each of these recipes, big flavors and simple techniques transform pantry staples, common proteins, or centerpiece vegetables into a delicious meal. And each intuitive recipe is a road map for other mix-and-match meals, which can come together in minutes from whatever's in the fridge.

With most recipes taking less than an hour to prepare, and just a handful of ingredients, you'll enjoy:
When it's a race to put dinner on the table, these recipes let you start at the finish line.

Christopher Kimball's Milk Street is located in downtown Boston -- at 177 Milk Street -- and is home to a cooking school, a bimonthly magazine, and public television and radio shows. They are the authors of Milk Street: The New Rules, The Milk Street Cookbook, and Milk Street: Tuesday Nights, which won both the IACP and James Beard Awards for General Cooking.

Milk Street founder Kimball (Milk Street: The New Rules) collects solid recipes with six ingredients or fewer that build flavor with powerhouse components rather than fussy prep. Most of these meals, in which 'time is no longer the key ingredient,' are prepared in a single pot. The simplicity is appealing and the flavors are bright...The quick-and-easy concept is carried out consistently, and this clever title will be a boon for weeknight cooks.Publishers Weekly

[R]eaders will delight in these fresh, surprising dishes, which usually take 30 minutes or less to prepare...The splashy color photos of the finished dishes are smartly laid out, and the recipes are easy to follow, certainly plentiful, and helpfully organized into vegetable, beans and grains, pasta, seafood, chicken, pork, beef, and dessert chapters. Another strong outing by Kimball and his popular Milk Street crew. Booklist

Once again, Christopher Kimball and the rest of the James Beard Award-winning team at Boston’s Milk Street have penned a cookbook that uses transformative ingredients and clever techniques to make deliciously quick weeknight dinners. Mercury News

Kimball says when he founded the Milk Street empire from which this latest cookbook was born, he seized onto a more global view of cooking -- that it's the ingredients that matter most. Here he makes a compelling case for what he deems is a "powerhouse supermarket pantry" -- miso, garam masala, harissa and ground turmeric to name a few -- and delivers on the promise the investment brings...This is a recipe collection bursting with ease, allowing a handful of key ingredients to orient a dish.CNN Travel

Back in March, everyone seemed to be getting reacquainted with their kitchens, rediscovering untouched corners of the pantry and nurturing sourdough starters... Eight months in, even the most enthusiastic cook could use a break from routine. Christopher Kimball’s Milk Street Kitchen... is perfectly poised to meet that need.

Learn how to make recipes that take less work, fewer gadgets, and come alive with flavor. Every cook can find something here that will become a family favorite or simplify the process of getting supper on the table every night.Waco Tribune-Herald