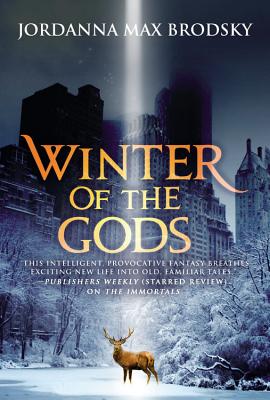 By Jordanna Max Brodsky
$26.00
Email or call for price

This is book number 2 in the Olympus Bound series.

Selene DiSilva, goddess of the hunt, squares off against a killer who threatens the very existence of the gods themselves in this stunning sequel to Jordanna Max Brodsky's The Immortals, "a lively re-imaging of classical mythology." (Deborah Harkness)

Winter in New York: snow falls, lights twinkle, and a very disgruntled Selene DiSilva prowls the streets, knowing that even if she doesn't look for trouble, it always finds her.

When a dead body is discovered sprawled atop Wall Street's iconic Charging Bull statue, it's up to Selene to hunt down the perpetrators. Her ancient skills make her the only one who can track a conspiracy that threatens the very existence of the gods, including Selene, who was once known as Artemis.

"The Immortals is a lively re-imagining of classical mythology with an engaging premise, a page-turning plot, and an eye for the arresting and uncanny in contemporary urban life."—Deborah Harkness, New York Times bestselling author of A Discovery of Witches on The Immortals

"Imaginative and fast-paced, The Immortals is pulse-pounding entertainment."—Kevin O'Brien, New York Times bestselling author of No One Needs to Know on The Immortals

"Brodsky's writing has claws...They sink in with the first word and don't let go until you are finished with the book."—Darynda Jones, New York Times bestselling author on The Immortals

"Irresistible...a page-turner that deftly weaves action, romance, and a dash of intellectual heft into one seamless whole."—Dustin Thomason, New York Times bestselling author on The Immortals

"Painstakingly researched, intellectually complex, and deeply rooted in the history and mythology of Ancient Greece, THE IMMORTALS is a richly imaginative, multi-layered tale that stimulates the heart and the mind in equal measure."—Ian Caldwell, New York Times bestselling author on The Immortals